The corporate media in recent years has taken to deploying what “can best be described as an unholy mix of junior high hall-monitor tattling and Stasi-like citizen surveillance,” independent journalist Glenn Greenwald noted.

“It is half adolescent and half malevolent. Its primary objectives are control, censorship, and the destruction of reputations for fun and power. Though its epicenter is the largest corporate media outlets, it is the very antithesis of journalism,” Greenwald wrote in a Feb. 7 analysis. 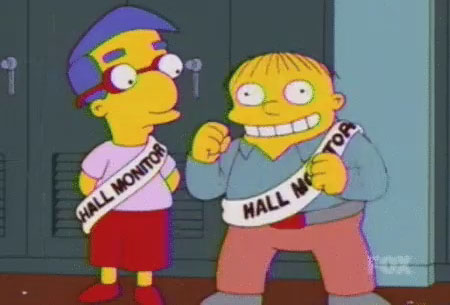 Legacy media has given us “the unimaginably warped dynamic in which U.S. journalists are not the defenders of free speech values but the primary crusaders to destroy them,” Greenwald noted.

The analysis pointed to a “toxic strain” of “authoritarian ‘reporting’ ” that has infected corporate media newsrooms.

CNN’s “media reporters” (Brian Stelter and Oliver Darcy), NBC’s “disinformation space unit” (Ben Collins and Brandy Zadrozny), and the tech reporters of The New York Times (Mike Isaac, Kevin Roose, Sheera Frenkel), Greenwald noted, “devote the bulk of their ‘journalism’ to searching for online spaces where they believe speech and conduct rules are being violated, flagging them, and then pleading that punitive action be taken (banning, censorship, content regulation, after-school detention). These hall-monitor reporters are a major factor explaining why tech monopolies, which (for reasons of self-interest and ideology) never wanted the responsibility to censor, now do so with abandon and seemingly arbitrary blunt force: they are shamed by the world’s loudest media companies when they do not.”

Oliver Darcy “has built his CNN career by sitting around with Brian Stelter petulantly pointing to people breaking the rules on social media and demanding tech executives make the rule-breakers disappear,” Greenwald noted. “The little crew of tattletale millennials assembled by NBC — who refer to their twerpy work with the self-glorifying title of ‘working in the disinformation space’: as intrepid and hazardous as exposing corruption by repressive regimes or reporting from war zones — spend their dreary days scrolling through 4Chan boards to expose the offensive memes and bad words used by transgressive adolescents; they then pat themselves on the back for confronting dangerous power centers, even when it is nothing more trivial and bullying than doxxing the identities of powerless, obscure citizens.”

The worst, Greenwald noted, are the tech reporters at The New York Times, “due to influence and reach if no other reason. When Silicon Valley monopolies, publicly pressured by Rep. Alexandria Ocasio-Cortez and other lawmakers, united to remove Parler from the Internet, the Times’ tech team quickly donned their hall-monitor goggles and Stasi notebooks to warn that the Bad People had migrated to Signal and Telegram. This week they asked: ‘Are Private Messaging Apps the Next Misinformation Hot Spot?’ One reporter ‘confess[ed] that I am worried about Telegram. Other than private messaging, people love to use Telegram for group chats — up to 200,000 people can meet inside a Telegram chat room. That seems problematic.’ ”

These “journalists” do what they do “in part for power: to ensure nobody but they can control the flow of information,” Greenwald noted. “They do it partly for ideology and out of hubris: the belief that their worldview is so indisputably right that all dissent is inherently dangerous ‘disinformation.’ And they do it from petty vindictiveness: they clearly get aroused — find otherwise-elusive purpose — by destroying people’s reputations and lives, no matter how powerless. Whatever the motive, corporate media employees whose company title is ‘journalist’ are the primary activists against a free and open Internet and the core values of free thought.”

Greenwald goes on to note how these “journalists” are now infiltrating private chat apps such as Clubhouse looking for any reason to destroy people who don’t bow to their worldview.

“The participants in Clubhouse have tried to block these tattletale reporters from eavesdropping on their private conversations precisely because they see themselves as Stasi agents whose function is to report people for expressing prohibited ideas even in private conversations.”

The purpose of “these lowly accusatory tactics,” Greenwald concludes, is “to control, to coerce, to dominate, to repress. The people who engage in these character-assassinating, censorship-fostering games — especially those who call themselves ‘journalists’ — deserve nothing but intense scorn. And those who are free from their influence and power have a particular obligation to heap it on them. Aside from being what it deserves, that scorn is the only way to neutralize this tactic.”