There is no evidence that any of the planning for the Jan. 6 siege on the U.S. Capitol was made on Parler.

Yet Google, Apple and Amazon censored then removed Parler based largely on accusations that the free speech platform was used to organize the violence. 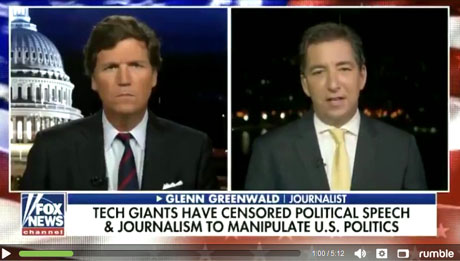 In an interview with Fox News host Tucker Carlson, independent journalist Glenn Grennwald noted: “Of the first 13 people arrested by the FBI in connection with the event at the Capitol, a total of zero were active users of Parler. The overwhelming amount of planning for that event, the overwhelming amount of advocacy for people to go there and to breach the Capitol was done on Facebook, and on YouTube, and on Twitter.”

“This is one of the ironies is that Google is one of the monopolies that wants to police our discourse and control our thinking and rule our politics that kicked Parler off of its app at exactly the time that Parler had gone to number one,” Greenwald noted.

“Google said, we will not allow you on our service. The reality is the service that Google owns, YouTube, played a much greater role.”

In a Jan. 12 article on substack.com, Greenwald noted that “liberals celebrated this use of Silicon Valley monopoly power to shut down Parler, just as they overwhelmingly cheered the prior two extraordinary assertions of tech power to control U.S. political discourse: censorship of The New York Post’s reporting on the contents of Hunter Biden’s laptop, and the banning of the U.S. President from major platforms.”

“Not only did leading left-wing politicians not object but some of them were the ones who pleaded with Silicon Valley to use their power this way,” Greenwald wrote, pointing specifically to New York socialist Rep. Alexandria Ocasio-Cortez. He also pointed to journalist Michelle Goldberg, who expressed concern over the power of big tech companies but lauded their actions anyway.

“That is because the dominant strain of American liberalism is not economic socialism but political authoritarianism,” Greenwald said, and “they are now calling for the use of the most repressive War on Terror measures against their domestic opponents.”