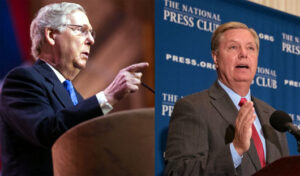 With Americans and Afghan allies still trapped in Afghanistan, Republican politicians are vowing to respond by getting “real mad and stuff” about it.

“Oh yeah, you bet I’m mad! I’m spittin’ mad, I sure am,” said Sen. Lindsey Graham.  … Sources say Sen. Graham and others [who like the corporate media have yet to break their silence on the ongoing audits and widespread scrutiny of the disputed 2020 election] may even pound their fists on a podium while talking about it, or raise their voices slightly, but not enough to break the rules of decorum.

They will then send a bunch of angry emails to their email lists saying how angry they are — with links to donate to their reelection campaigns.

Sen. Mitch Mcconnell also weighed in. “Yup, I’m purdy mad too,” he said at a fundraising dinner. … Republicans vow to stay really mad [without addressing the forbidden topic of computerized voting technology that is connected to the Internet and which may have helped them get elected] until the next news cycle makes everyone forget about all this.

GOP elected officials, plan to get mad up to a point, still silent about audits of 2020 election