Hillary Clinton is illegitimate. Whether or not she wins in November, Clinton has forfeited the political credibility and moral authority to be our next president.

Hillary may not know it, but she has already lost.

Polls now show Donald Trump is surging; Clinton is plummeting. A major reason for her decline is the utter derision and disdain she recently displayed against Middle America. 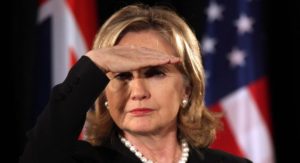 At a lavish $2,400-a-plate LGBT fundraiser, Hillary said that one-half of Trump’s supporters can be placed into a “basket of deplorables.” Clinton smeared them as “racists, sexists, xenophobic, homophobic and Islamophobic.” In other words, she called a quarter of the country bigoted scum, who — according to her — are “irredeemable.”

She also insulted the other half of Trump’s backers, saying they are driven by “economic anxiety.” According to Hillary, these voters are the “forgotten” ones, pitiful losers who feel the government and the economy have abandoned them. Hence, Clinton divided Trump’s supporters into two categories: Closet white supremacists or the pathetic economically downtrodden. Ultimately, she simply expressed liberals’ hatred and contempt of middle- and working-class Americans — what Richard Nixon termed the Silent Majority.

Her anti-American bigotry may play well in progressive circles. But her comments have shattered her ability to be the next commander-in-chief.

Then-candidate Barack Obama in 2008 famously disparaged rural voters in Pennsylvania as those who “bitterly cling” to their Bibles, guns or “antipathy” to “immigrants.” His comments were pernicious (and false). Yet, they didn’t go anywhere near as far as Hillary’s “deplorables” comments.

She has done something unprecedented: openly revile and vilify half of the country. She has crossed the Rubicon. She cannot possibly unify or lead America after publicly demonstrating such outright contempt and disgust with 50 percent of Americans.

Think about it: What leader — outside of a dictatorial demagogue — could possibly govern a nation, half of whose citizens are loathed? Moreover, those very citizens — the “deplorables” — will not respect or pay allegiance to a regime and a leader who says they are not only “irredeemable” but not even a “part of America.” They will be rendered exiles in their own land, a relentless target of government abuse and harassment.

If Hillary wins, she will preside over a deeply fractured and alienated country. She will lack the ability — even the very legitimacy — to govern. Under her tenure, America will continue to slowly break-up — morally, culturally and politically. The center will not be able to hold.

Moreover, she is Nixon in pant suits. Watergate eventually destroyed him. Clinton’s rampant criminal behavior will destroy her as well. There is one over-riding truth about Hillary: She is a political gangster, a Balkan-style oligarch who belongs in prison. Leave aside Clinton’s scandals regarding her personal server and emails, which compromised top secret classified information and violated numerous laws.

The deeper crime was the reason why she set-up a personal email system: to turn the Clinton Foundation into a secret slush fund to enrich her (and Bill) to the tune of hundreds of millions of dollars. Since the Clinton Foundation was created the Clintons have amassed nearly $240 million in personal wealth. This grotesque amount is only what we know; the real figure could — and probably is — much higher.

In other words, she engaged in a massive criminal enterprise involving selling access, bribery, influence-peddling and corruption, in which she pimped out vital national security interests and even positions within the State Department to major Foundation donors.

It was a classic “pay-to-play” scheme. The Russians, Saudis, Gulf Arabs, Chinese, the Muslim Brotherhood — practically every U.S. enemy benefited from it.

When former Illinois Gov. Rod Blagojevich engaged in pay-to-play, trying to sell a Senate seat, he got 14 years in prison. His crimes pale in comparison to Hillary’s. Yet, she still walks free — for now.

If Clinton somehow manages to grind out a victor in November, these facts will not disappear.

Liberals are supporting a criminal and a traitor. She sold her country out for power and money. This may fly with the morally bankrupt progressive Left. But it will not — and should not — with Middle America.

We will demand justice. And, just like Watergate, eventually we will get it.

One way or another, Hillary is going down.