The examination would prove that Trump won the election, Giuliani said. 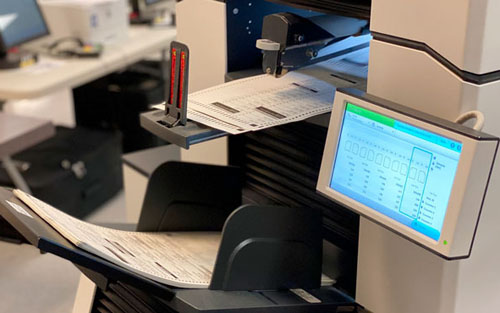 Giuliani’s comments came after the Board of Supervisors in Maricopa County, Arizona voted on Friday to reject a subpoena for voting machines.

“If we get a warrant to search all of the machines … Why would you ever not want people to look at voting machines? Voting machines aren’t private,” Giuliani told Steve Bannon’s “War Room.”

Giuliani said officials should make the Arizona machines “available,” and “we can do it publicly.”

“You can have the press there, make sure we don’t do any damage to the machine. Give us eight hours,” he added. “And we’ll show you how many false votes were in this machine, and how it was used to manipulate the vote. Do that in Georgia, do that in Arizona, do that in Michigan, and do that in Pennsylvania.”

In those areas, it’s necessary to look at the machines for a transparent election audit, Giuliani suggested.

“Let us see the machines, let us examine them. We’ll examine them on television if you want. It takes eight hours to do 22 machines. So we give one day to one place one day to another,” Giuliani said.

The analyst who led the forensic audit of Dominion Voting Systems in Michigan said on Friday the information state officials pushed to redact shows that the outcomes of races were changed, The Epoch Times reported.

“The original report had log evidence that we published in the report to show exactly what we did and exactly the findings. Now, those did ultimately get redacted. And so now, the complaint is ‘well, but there’s no real proof’ and Dominion says ‘no, these things can’t be done,’ ” Russell Ramsland Jr. said during a virtual appearance on Newsmax TV’s “Greg Kelly Reports.”

In the audit, Ramsland said his team concluded Dominion’s system “is intentionally and purposefully designed with inherent errors to create systemic fraud and influence election results.”

“The system intentionally generates an enormously high number of ballot errors. The electronic ballots are then transferred for adjudication. The intentional errors lead to bulk adjudication of ballots with no oversight, no transparency, and no audit trail. This leads to voter or election fraud. Based on our study, we conclude that the Dominion Voting System should not be used in Michigan. We further conclude that the results of Antrim County should not have been certified,” Ramsland said.

Meanwhile, a data analyst said his research found that Joe Biden outperformed in counties that used the Dominion or HART InterCivic voting machines.

“Analysis evidence suggests the use of the Dominion X/ICX BMD (Ballot Marking Device) machine, manufactured by Dominion Voting Systems, and machines from HART InterCivic appear to have abnormally influenced election results,” the data analyst wrote in a report that went public on Thursday.

The data analyst chose to remain anonymous for safety reasons. He has 30 years of experience in data analysis, according to his profile which was reviewed by The Epoch Times.

The data analyst said he used voting data and 2017 census data to set up a baseline scenario to predict the election result. Then, he used the baseline model to compare the results of the November election.

The results show Biden falling above the prediction line in 78 percent of counties that use voting machines from Dominion and HART InterCivic.

The analysis also indicates that Biden consistently received 5.6 percent more votes in those counties than he should have.

“That should not happen … The counties using Dominion machines are clearly too high,” the analyst said in a video introducing his research results. “That is a dramatic red flag in my opinion … something’s going on here.”

The analyst added: “The patterns I’m seeing are across many counties — so my findings concern an organization with large-scale, national impact. That is, what I am seeing is not a local optical scan operator running a box of ballots through the system three times.”