Giuliani enters the fray: ‘Do you think we are stupid?’ 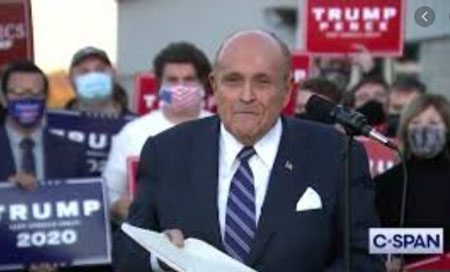 “They’re not going to steal this election,” Giuliani said.

Giuliani said ballots were popping up from all over the place in the state, at least 100,000 ballots did not get checked by vote monitors and Trump campaign election observers were prevented from observing the count.

The former New York City mayor said it was inconceivable that Trump could be 500,000 votes ahead with more than 80 percent of the votes counted and not be declared the winner in Pennsylvania.

“We’re going to continue the lawsuit here. We’re gonna bring a second one and then we’re going to bring a federal lawsuit,” he said. “Quite possibly, we’ll do a national lawsuit and really expose the corruption of the Democratic Party. But this is beyond anything I’ve ever seen before.”

2020 election, Giuliani enters the fray: ‘Do you think we are stupid?’, WorldTribune.com