Getting in people’s faces at restaurants: D.C. diners willingly complied with Marxist mob

Videos are emerging of a new trend among the woke Black Lives Matter crowd. The self-admitted Marxists are confronting white diners at restaurants, invading their personal space, screaming “White silence is violence!” in their faces and demanding they raise a fist in solidarity. 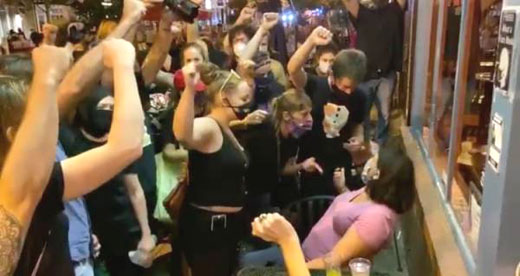 The mostly white mob found the spineless targets they were looking for on Monday in a liberal Washington, D.C. neighborhood where most are already sympathetic to their cause.

Ignoring social distancing guidelines, the mob crowds around their targets and demands compliance with a salute to their Marxist movement.

One of the videos showed that most of those confronted complied with the mob. But Lauren Victor did not. She was mercilessly bullied for her non-compliance.

According to The Washington Post, Victor refused to raise her fist in solidarity because she felt like she was under attack.

“In the moment, it didn’t feel right,” Victor said, adding that she also could understand their anger. “I wasn’t actually frightened. I didn’t think they’d do anything to me,” she said. “I’m very much with them. I’ve been marching with them for weeks and weeks and weeks.”

Another video that went viral Monday showed a man and a woman sitting outside a restaurant when the mob confronted them.

Other diners nearby all complied with the mob’s demands to raise their fists, but the man and woman kept their hands on the table. The mob screamed expletives at the couple and demanded they raise their fists. One mob member appeared to yell at the man, “Pasty piece of sh–.”

There is only one proper response to this. F*** these people. https://t.co/ssmy0bXqHb