Georgia: Dominion voting machines ‘in three of the largest Republican precincts are down’

Reports out of Georgia say that Dominion Voting Systems machines in key Republican-dominated areas in the state were not working.

There are no reports of Dominion machines being down in Democrat precincts. 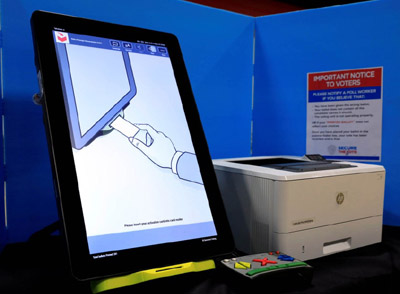 “Dominion machines in 3 of the largest Republican precincts are down.They are told they can’t scan their ballots because the machines don’t work.The poll workers are saying ‘When it’s fixed we’ll scan it for you’. There’s all kinds of red flags,” radio host John Fredericks reported.

President Donald Trump tweeted Tuesday at 1:18 p.m.: “Reports are coming out of the 12th Congressional District of Georgia that Dominion Machines are not working in certain Republican Strongholds for over an hour. Ballots are being left in lock boxes, hopefully they count them. Thank you Congressman @RickAllen!”

Other reports cited the Georgia Secretary of State’s office as saying the Dominion software loaded on security keys was corrupt and new programs were created and were being delivered to polling locations by law enforcement.

Newsmax reported that Dominion voting machines were down or malfunctioning in at least 3 GOP counties and workers were not able to reach anyone through the Dominion support number.

A voter in the city of Covington in Newton County tweeted: “Just voted in Newton County Georgia. Heavy republican district. When I went to place my printed ballot into the dominion machine, the poll worked said the scanner was broken and someone was coming to fix it, I placed it in the machine slot but not in the scanner.”

The voter said a man staffing a GOP voter hotline told him they were receiving calls about the problem, “UPDATE. I called @GaRepublicans hotline and the guy said they are already hearing about these types of problems!”

Another Newton County voter tweeted: “The Dominion scanner at my polling place in Newton County is not working. I’d be happy to meet anyone there and help out any way I can.”

A voter in Sandy Springs in Fulton County tweeted: “Just voted in #Georgia runoff & of course in heavily @GOP precinct at HeardsFerry—Sandy Springs #Dominion scanners “are down.” This means @TheDemocrats activist now will be in charge of scanning my vote for @sendavidperdue & @KLoeffler”.

Another tweeted: “A friend just texted in Georgia that the Dominion voting machine in Troup County is jammed. They put his ballot in a box and said they’d scan it later.”

Similar reports came out of Paulding and Columbia counties.

“You placed your ballot in the “emergency bin” where ballots are locked until the machine is repaired and poll workers can scan your ballot. Under normal circumstances I would say that is secure. In GA…I would have found a seat until it was repaired and fed the ballot myself,” a voter tweeted. In response, another tweeted: “This is also happening in Paulding.”

Another tweet: “My family in GA trying to vote this morning. Was told that machines are “down” and he has to vote provisional. Here’s the catch: Machines are NOT down in Democrat county. Just the Repub Co. Columbia county…It’s a Republican-majority county. People forced to vote with provisional ballots and told to check online later to see if the vote was counted. Next county over is Richmond Co, a Democrat-majority county, with machines that are working just fine.”