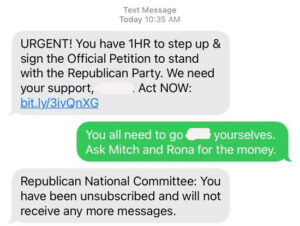 A veteran colleague who “knows where the bodies are buried” in our nation’s capital, erupted upon receiving an Inauguration Day fundraising appeal from the political party of Mike Pence and Mitch McConnell.

This screenshot of his exchange demonstrated, he said, that the Republican Party had been flooded with responses just like his.

“In the aftermath of the historic Jan. 6, 2021 betrayal of the American people by Vice President Mike Pence and the disgusting Jan. 19 performance by Senate Majority Leader Mitch McConnell, we were presented with irrefutable proof of what we had long suspected,” he said. “The uniparty has contempt for the very people who have sacrificed to donate millions of dollars to them over the years so that they could do the right thing at the right time. Forget their excuses. We were paying them to do their job.”

“We heard daily for 4 years (and never with evidence) that Donald Trump was an illegitimate president. Not just Democrats. Republicans hated him too. Today we inaugurated a president after the U.S. Congress (including Mitt Romney and his niece Rona McDaniel who heads the RNC), the DOJ, the media and the Supreme Court refused to even hear or investigate abundant evidence that this man should not even have security clearance and certainly did not win the 2020 election.”

The good news? Tens of millions of Americans have been awakened to the pervasiveness of the corruption in their nation’s capital, he said.