The head of France’s DGSI intelligence agency warned that France was “clearly targeted” by Islamic State of Iraq and Levant (ISIL) a week before EgyptAir Flight 840 crashed into the Mediterranean. 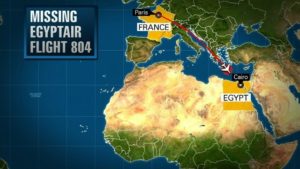 The Airbus A320 carrying 56 passengers, seven crew and three security officers disappeared early on May 19 as it flew from Paris to Cairo.

DGSI head Patrick Calvar told a parliamentary committee on national defense in Paris on May 10 that ISIL was planning “a new form of attack.”

Calvar was quoted in The Local as saying: “We risk being confronted with a new form of attack: a terrorist campaign characterized by leaving explosive devices in places where big crowds gather, multiplying this type of action to create a climate of panic.”

Egyptian officials said that terrorism was more likely to have caused the crash than mechanical failure.

A senior Greek air safety official says debris that was found in the Mediterranean does not belong to Flight 804.