Google Maps posted the names and exact locations of donors to the Canadian truckers Freedom Convoy after major media outlets attempted to dox the donors. 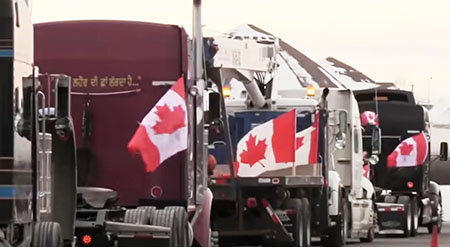 The names of 90,000 people who donated to the cause were leaked as a result of the hack of the GiveSendGo crowdfunding platform, reports say.

Media operatives, including those from the CBC, Washington Post, and New York Times exploited the hack to contact donors and inquire about why they gave to the Freedom Convoy.

Google Maps posted a link which included pins of the exact locations of donors throughout Ontario, with each pin listing their names, donor ID, email address, and the amount they donated, including those as low as $10, Breitbart News reported on Feb. 22.

The donors’ information was public for hours before Google terminated the link, the report said.

Several major publications, including The New York Times and The Washington Post, ran articles based on the leaked data. Both outlets published the names of Freedom Convoy donors and reported contacting small-dollar donors to investigate their contributions.

Salt Lake Tribune political correspondent Bryan Schott, who wrote an article analyzing the leaked data to identify Utah donors by zip code, tweeted he had “reached out to people from Utah who appeared on the leaked Canadian trucker donation data.” After harsh backlash for his actions, Schott deleted the tweet and then later claimed he had sought out the information on Utah donors from the leaked list “out of genuine curiosity.”

Several individuals whose names appeared in the donor lists have reported experiencing harassment and negative consequences:

Tammy Giuliani, who donated $250 to the Freedom Convoy fundraiser, was forced to close her gelato store after receiving threats of violence over her donation. Marion Isabeau-Ringuette, communications director for the Ontario Solicitor General, is no longer employed in the state government after her donation to the Freedom Convoy was revealed, according to Toronto CityNews.

All the people in Ontario (and their names and addresses) who donated to freedom were today exposed on google maps. Complete breach of privacy.

This is a war people.