Fox calls it for Tampa Bay early in first quarter; Outcome of Super Bowl LV may not be known for weeks 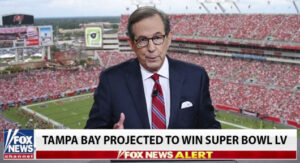 Fox News has projected the Tampa Bay Buccaneers will be the winners of Super Bowl LV, despite it being only 4 minutes into the first quarter.

“Our expert analysts are now calling the game for Tampa Bay,” said anchor Chris Wallace [according to a Babylon Bee analysis]. More ….

However the outcome of the Super Bowl is being contested. Fans who were ordered not to cheer by Dr. Anthony Fauci have also been warned against publicly expressing an opinion about the winner of the game.

The FBI is using facial recognition technology to identify and arrest domestic terrorists suspected of declaring the wrong team as the winner.

The Associated Press is expected to declare the winner within a week but since many if not most Americans do not care what the AP thinks, the actual outcome may not be determined until John Galt is located. By the way, “who is John Galt?“

Fox calls it for Tampa Bay early in first quarter; Outcome of Super Bowl LV may not be known for weeks