Look Ahead America, a nonprofit run by former Trump administration and campaign staffers, filed a lawsuit on Tuesday against the Stark County, Ohio Board of Elections regarding the county’s use of Dominion Voting Systems equipment. 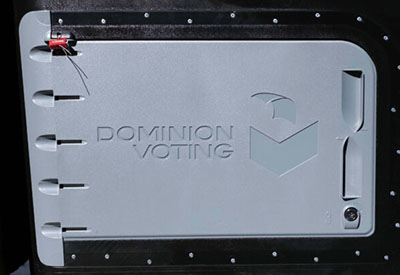 The lawsuit alleges the election board violated open meetings laws when members decided behind closed doors in December to purchase Dominion equipment.

“The process engaged in by the Board of Elections was not transparent and open to the public,” Look Ahead America Executive Director Matt Braynard said.

Look Ahead America is asking a Stark County Common Pleas judge to invalidate the election board’s Dec. 9 vote to approve the purchase of 1,450 Dominion ImageCast X voting machines and other voting equipment.

Before voting on the contract with Dominion, election officials in Stark County excluded the public for 18 minutes of their discussion, a violation of open meetings rules, Braynard said.

“Nothing necessitated the public’s exclusion,” Braynard said. “And for the next months thereafter, they continued to exclude the public when discussing the contract with Dominion.”

Ohio law allows public bodies to discuss in executive session the purchase of public property, but only “if premature disclosure of information would give an unfair competitive or bargaining advantage to a person whose personal, private interest is adverse to the general public interest,” the lawsuit said.

“They didn’t want the public to hear what they had to say about buying black-box voting equipment. They broke the law to do it, and we’re going to hold them accountable,” said Braynard.

Look Ahead America says its suit attempts to ensure any voting system purchase relies on open-source software to “restore trust” in the state’s elections.

Braynard said he was a director of data and strategy for Trump’s 2016 presidential campaign. He said he, along with a board of advisers of about 30 other former Trump campaign staffers, started Look Ahead America in 2017. The group’s first purpose was to help educate and register to vote “disaffected patriotic Americans,” many of them from blue-collar backgrounds. The second purpose was to promote voter integrity.