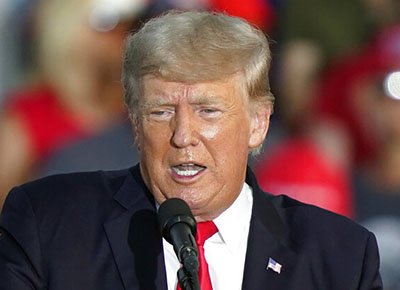 “Fox doesn’t understand that it is missing a rating bonanza by not covering the 2020 Election Fraud, the Crime of the Century, which is being exposed throughout many states on a daily basis. They are also doing a disservice to our Country. People have turned them off!”

“I spoke to the wonderful mother and devoted husband of Ashli Babbitt, who was murdered at the hands of someone who should never have pulled the trigger of his gun. We know who he is. If that happened to the “other side,” there would be riots all over America and yet, there are far more people represented by Ashli, who truly loved America, than there are on the other side. The Radical Left haters cannot be allowed to get away with this. There must be justice!”

“Wow, the Governor of Georgia, Brian Kemp, was booed off the stage Saturday at a Georgia Republican Party event. They wouldn’t let him speak. It is amazing how the people get what happened in Georgia, and elsewhere! The election was rigged, and everybody knows it. Kemp refused to call a Special Session of the Legislature, and did absolutely nothing. Now our Country is going to hell!”