Joe Biden’s disastrous handling of the U.S. withdrawal from Afghanistan has “breathed new life” into the worldwide Islamic terrorist movement and U.S. intelligence officials will not know the damaging extent of Biden’s actions for “a long, long time to come,” former Director of National Intelligence John Ratcliffe said. 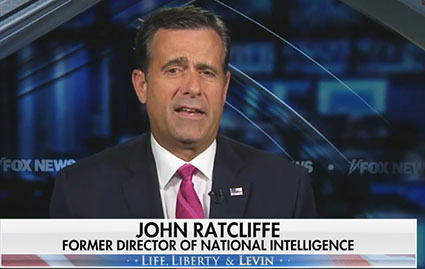 In an interview with host Mark Levin on Fox News’s “Life, Liberty & Levin” on Sunday, Ratcliffe called Biden’s Afghanistan strategy a “painful, colossal, epic failure. It’s the most profound loss for the United States, certainly in our lifetime.”

Asked what Biden has done to America’s national security, Ratcliffe responded: ““I wrote an article as the Director of National Intelligence saying that China was our number one national security threat; I did that as I was walking out the door based on the …. fact that, you know, I’m the person that saw more intelligence than anyone else in the country over the past year, and China very much is that existential threat to our country. But if I had to write that op-ed today, I would tell you that I think our greatest national security threat, at least in the short term, is Joe Biden, and our national security apparatus.”

Ratcliffe noted that the Trump administration’s intelligence “was crystal clear about what was going to happen in Afghanistan if we withdrew without conditions-based terms that we had negotiated and when Biden abandoned that plan; it went exactly to what we said was going to happen and that is unfortunately a trend that has continued where this administration and this national security apparatus keeps making bad decisions; keeps ignoring the actual intelligence that we have. And honestly, nothing concerns me more right now.”

In further explaining how Biden has damaged America’s national security, Ratcliffe told Levin: “How do you think our intelligence is going to work in the Middle East and in other places around the world, when we rely so much on human intelligence sources, people who work with the United States knowing that they will be shielded from and have the protection of the United States at the end of the day, when they watch the people that have worked with us in Afghanistan for the last few years be beheaded in front of their families?”

“So you know, our ability to even conduct the best intelligence around the world has been impacted,” he said.