ActBlue funneled more than $1.5 billion to leftist candidates in 2018 alone and has moved almost $900 million to assist progressives in the 2020 election cycle.

An analysis of Federal Elections Commission (FEC) data shows that half of all contributors to ActBlue in the first eight months of 2020 are listed as unemployed. The FEC requires donors to list their employers, but there is no such check on those who identify themselves as unemployed. 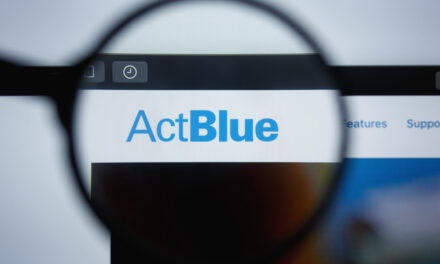 Take Back Our Republic senior adviser Matt Braynard said the result is donations that are virtually untraceable.

“Because they are not verifying that the people making the donations are in fact the donors on record, they cannot reliably be traced,” Braynard told The Washington Times.

“Our biggest concern is foreign money. Do you really believe that half of the people who are giving money through ActBlue don’t have a job?” Take Back president John Pudner told The Washington Times. “To me, that just seems absurd.”

A second analysis found that ActBlue claims that most of its millions of separate donations are for $100 or less.

“The organization has leveraged its powerhouse presence to negotiate a special relationship with banks so that it does not have to verify donors’ identities when processing its gift cards, as is normally required for virtually all online transactions,” Phill Kline, director of the Amistad Project of The Thomas More Society, noted in a Sept. 16 op-ed for Real Clear Politics.

Analysts who follow the trail of campaign cash have long suspected this method allows ActBlue or any mega-donor to easily break large donations down into smaller gifts to avoid campaign finance laws and FEC scrutiny.

“Once an individual donor or third-party organization has given $200 or more to a candidate, for instance, their information is supposed to be added to a public FEC database for the sake of transparency,” Kline noted. “ActBlue’s structure could easily allow illegal donations made online to be broken down into smaller gifts from claimed U.S. sources with little chance of exposure. ActBlue’s design would allow large donors to exceed contribution limits without even triggering the threshold for public reporting.”

A computer analysis calls into question the legitimacy of these gifts.

Forensic analysis conducted by The Amistad Project in cooperation with Take Back Our Republic reveals that 4.7 million of the 9.7 million ActBlue donations are reported to be from the unemployed. That’s a whopping 48.4% of all ActBlue donors in 2019-2020.

In comparison, analysis of the Republican counterpart to ActBlue, WinRed, reports that 4.1% of its donors were unemployed, a figure that roughly matches the national unemployment rate during that time period.

“When Take Back Our Republic first pointed out in 2015 that foreign interests could potentially use gift cards to flood money in through ActBlue’s unverified credit card system, more than 100 members of Congress stopped using the system and 31 Democrats joined 52 Republicans in trying to outlaw the practice,” said Pudner.

“It took vendors only a few hours to change their setup to allow the banks to verify if donations were really from Americans,” Pudner added. “Unfortunately, as things turned harshly partisan after Trump’s election, ActBlue doubled down and moved more and more candidates onto an unverified system at a time when intelligence officials are warning that foreign interests want to impact who wins our elections.”

ActBlue’s fundraising tracker recorded a $30 million jump in contributions from about 9 p.m. Friday, shortly after Ginsburg’s death was announced, to 9 a.m. Saturday, while setting a single-hour record of $6.3 million from 10 p.m. to 11 p.m. Friday, The New York Times reported.

On Saturday, ActBlue notched $42 million in donations, breaking a one-day record set June 2 amid protests over the death of George Floyd, according to Politico.

Democratic National Committee chair Tom Perez said in a Saturday evening email that, “Asking for contributions to our party in the wake of this harrowing loss is not easy for me. But it is absolutely clear that Justice Ginsburg spent her final years and months fighting through pain for all of us—and now we must do the same to honor her legacy.”

Democrats, not surprisingly, got a pass from the major media for fundraising immediately following Ginsburg’s death.

But leftists and their media allies had no problem blasting the Trump campaign’s fundraising appeal Saturday that cited the looming Supreme Court battle.

“It took Trump less than 24 hours to FUNDRAISE OFF OF RUTH BADER GINSBURG’S DEATH,” tweeted former Hillary Clinton campaign staffer Judd Legum. It took ActBlue and Perez less time than that, but no leftists or their media accomplices tweeted their dismay.

Meanwhile, ActBlue spokesperson defended the integrity of its system, telling the Washington Times the platform uses “an array of data sources, internal validation, and third party services to verify the validity of transactions.”

“In addition to our internal security practices, ActBlue is a PCI Level 1 certified service provider, which is the highest level an organization can obtain,” said the ActBlue spokesperson. “We’re also audited regularly by an external auditor.”

In his op-ed for Real Clear Politics, Kline noted: “For all the complaining they do about so-called ‘dark money’ in politics, it certainly appears that those on the Left are eager to get a slice of the pie — even if they possibly have to engage in some ‘creative accounting’ to make it seem as though everything is above-board.”