Florida Gov. Ron DeSantis issued pointed remarks in response to Google’s removal of multiple videos of a panel with scientists from Harvard, Oxford, and Stanford, which had been posted on his YouTube channel. 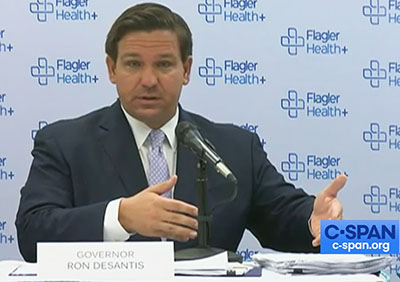 “Google and YouTube have not been, throughout this pandemic, repositories of truth and scientific inquiry, but instead have acted as enforcers of a narrative, a Big Tech council of censors in service of the ruling elite,” DeSantis said during an April 12 video conference call with three of the scientists from the banned video, as reported by The Epoch Times.

“When they took down the video” DeSantis added, “they were really continuing what they’ve been doing for the past year: stifle debate, short-circuit scientific inquiry, make sure that the narrative is not questioned. And I think that we’ve seen already that that has had catastrophic consequences for our society.”

“Gov. Ron DeSantis is a longtime proponent of free speech and has been at the forefront of the effort to demonopolize Big Tech,” Rumble CEO Chris Pavlovski stated on the company’s website.

“He understands firsthand Americans’ distrust of monolithic tech companies and the danger they pose to free expression and free markets,” Pavlovski continued.

In contrast with Youtube, “Rumble, on the other hand, invites robust and civic dialogue on our platform, including Gov. DeSantis’ insights and expertise.”

Earlier in April, Google-owned YouTube censored the governor without warning, deleting videos of a roundtable discussion between DeSantis and the prominent scientists.

The group of medical experts concluded that lockdowns were an ineffective measure against the spread of Covid-19.

The occasion of the videos was a re-convocation on leading epidemiologists on the one-year anniversary of the Great Barrington Declaration, in which they had urged for a “Focused Protection” strategy in response to the pandemic. The three scientists were joined by 34 cosigners in related fields from leading universities around the world.

Schools and universities should be open for in-person teaching. Extracurricular activities, such as sports, should be resumed. Young low-risk adults should work normally, rather than from home. Restaurants and other businesses should open. Arts, music, sport and other cultural activities should resume.

A year later, their advice has been vindicated, the American Enterprise Institute for Economic Research, the host of the events, asserts:

Lockdowners have lost the debate for lacking any evidence that their soul-crushing policies are good for public health. These heroic scientists departed from the media/government narrative when it mattered most. As a result, some states followed their point of view and their views have shown to be correct during the worst policy year of our lifetimes.

The censored video, with a full transcription, is available online at the American Enterprise Institute’s website.

DeSantis’ and his contributing panel’s experience on YouTube further demonstrates that World Tribune is in good company in its coverage of Covid-19 that has been censored on Twitter, Facebook, and Google.