A CNN “news” personality got a quick dose of reality after she read from the leftist script on how awful a place Florida must be under Republican leadership.

CNN ‘s Pamela Brown, brought on Republican Rep. Mike Waltz so she could lecture him about Florida’s response to the covid pandemic and its supposed “new voting restrictions.” 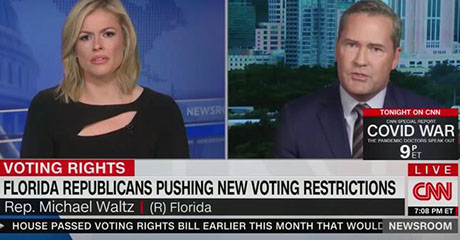 Brown opened the interview by bashing Florida: “Covid restrictions are nearly nonexistent there, but restrictions on voting are in the works,” she said.

Waltz promptly took Brown to school on both Florida’s coronavirus response and its voting integrity.

Waltz noted that Disney World, other tourist attractions and Florida’s schools have been open “for months” without major covid outbreaks. “We all want to follow the data, but I would suggest a lot of these lockdown states are not doing that,” he said.

When Brown attempted to twist Waltz’s commitment to election integrity as a sign he was a 2020 election truther, he shot back:

“You said Florida is tightening up the laws. But Florida used to be a laughingstock of elections, and now we had a very clear election because we did things differently in 16, and 18 and will continue to improve in 20, and so I just kinda reject the premise that Florida is already tightening its rules, what it’s doing is making it better, and I think if those other states do so then we’ll have a much cleaner and much more integral election going forward with voter integrity.”

Waltz informed Brown that Florida already had stricter rules for mail-in-voting than other states and Gov. Ron DeSantis was making the process even safer.

“We knew all of our numbers and all of our totals on election night. You contrast that with states who changed the rules months in advance with unelected officials,” Waltz noted, adding, “So, I think this notion that states don’t have the right to improve their elections over time is just a fallacious one.”

“Why do the Democrats, if everything is fine, want to make all states perform their elections the same with H.R. 1. And include things that just don’t make sense. Dropping the voting age to 16? Do we want teenagers voting?

“Banning any state from requiring I.D. You know, I have to present an I.D. to get cigarettes or beer! We certainly should, for the integrity of the vote. So, if everything is fine, why are the Democrats cramming this, and I can tell you what is going on in Georgia is about politics. They are gaslighting these changes. They are gaslighting these changes and improvements and fearmongering calling them racist, calling them Jim Crow. So that had they can then justify getting rid of the filibuster, and then cram through H.R. 1.

He also called out CNN for rushing to praise Georgia’s Republican officials during the contested 2020 election but then quickly demonizing them over the passage of the new election integrity law.

“But Gabriel [Sterling] and [Brian] Kemp were the same officials CNN and the media and others were lauding when they pushed back on Trump and now it’s a crisis and voter suppression and now it’s racist. So I think there’s a little bit of talking out of both sides of the mouth here,” Waltz noted.

When Brown tried to change the subject to China and coronavirus, Waltz hammered the point home again about H.R. 1:

“Their first bill, not immigration, not health care reform. Not transportation. Their number one priority, and if everything is fine, then why do they want to so dramatically change the way the entire nation votes?”