Felled by a ‘fresh breeze’: Trump on Biden’s stairs tumble: ‘I didn’t lose to him’

After watching footage of Joe Biden stumbling three times while attempting to climb the stairs to Air Force One, former President Donald Trump noted: “I didn’t lose to him.”

A White House spokesperson said Friday that Biden fell on the steps of Air Force One because “it’s pretty windy outside.” 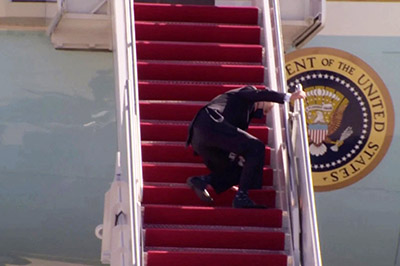 Wind gusts were 19 mph at Joint Base Andrews when Biden was boarding the plane which is officially categorized by the internationally recognized Beaufort Scale as a “fresh breeze.”

The 78-year-old Biden was boarding the aircraft at Joint Base Andrews just before noon on Friday for a flight to Atlanta when he stumbled. He gripped on to the railing, steadied himself and kept going but lost his footing a second time, and then a third.

Biden’s tumbles, to no one’s surprise, were not covered extensively by the White House propaganda cabal, also known as the corporate media.

In September 2020, when Trump walked slowly on a wet ramp at West Point, Biden said: “Look at how he steps and look at how I step. Watch how I run up ramps and he stumbles down ramps. OK? Come on.”

The corporate media had no problem playing up Biden’s quotes. “Trump’s West Point walk sparks questions about his health”, a CNN headline blared. “Trump tries to explain his slow and unsteady walk down a ramp at West Point”, a Washington Post headline said.

After Friday’s fall, many asked why the media — which enthusiastically reported on Trump slipping on a ramp — did not give the same zeal to its reporting of Biden’s stumbles.

Donald Trump Jr. tweeted: “I remember the press bashing Trump for touching the rail once. Biden falls repeatedly but I’m sure he’s the picture of health. No wonder all our enemies are pouncing simultaneously and mocking him publicly.”

“It wasn’t the wind, folks,” Trump Jr. tweeted along with a video edited to make it look like his father knocked Biden down with a golf ball.

It wasn’t the wind folks. pic.twitter.com/jYc01dBZCe

Joe Biden, Trump on Biden’s stairs tumble: ‘I didn’t lose to him’, WorldTribune.com