Misinformation and disinformation in the form of “fake news” is a threat to U.S. national security, according to a Pew Research Center survey.

A large majority of Americans (68 percent) believe fake news and information has a big impact on their trust in government, according to the survey. 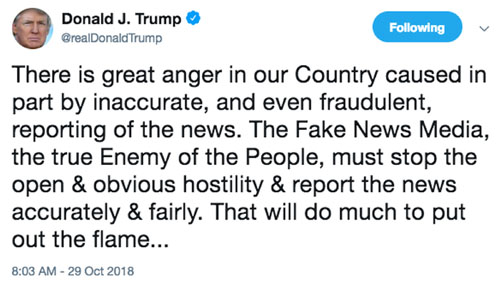 In the poll, conducted between Feb. 19 and March 4 on the Center’s American Trends Panel, 50 percent said made-up news and information was a “very big problem” in the country today and more serious than terrorism, climate change and racism.

Drug addiction, affordability of health care, how the U.S. political system operates, the gap between rich and poor, fake news, and violent crime all were ranked as more serious concerns than climate change and racism.

More than half of those polled (54 percent) say fake news impacts their confidence in other Americans.

More than half (51 percent) also say it impacts the ability of political leaders to get work done.

While most Americans blame political leaders and activist groups for creating misinformation over journalists, most say “the news media” is the most responsible for fixing the problem.

A majority of those surveyed said they think the problem will get worse over time.

Meanwhile, two reporters who were casualties of widespread industry layoffs this year are launching a nonprofit organization to protect other journalists amid the drive by big tech companies to threaten the journalism industry’s viability.

Laura Bassett, a former culture and political reporter at HuffPost, and John Stanton, a former BuzzFeed News Washington bureau chief, founded the Save Journalism Project which aims to save the news industry from the “monopolistic power of big tech companies,” according to a news release.

Firms like Google and Facebook dominate the digital advertising market, distributing news content without paying to produce it and dismantling traditional newspapers and digital news outlets, the group said.

The new nonprofit estimates 2,400 journalists lost their jobs in 2019 so far. It also estimates 1,300 communities lost local news coverage in the last 15 years, with 60 percent of the nation’s counties without a daily newspaper and 171 with no newspaper coverage at all.

Another non-profit, FreePressFoundation.org says it “was established to revive and sustain the American Free Press. Free Press Foundation has developed and sponsored a digital news service available to all publishers including citizen journalists.”