Facts matter: Have WHO and the media overstoked virus fears in anti-Trump power grab?

On March 3, the Director General of the World Health Organization (WHO) stated: “Globally, about 3.4 percent of reported COVID-19 cases have died. By comparison, seasonal flu generally kills far fewer than 1 percent of those infected.”

The director, Tedros Adhanom Ghebreyesus, also said: “While many people globally have built up immunity to seasonal flu strains, COVID-19 is a new virus to which no one has immunity. That means more people are susceptible to infection, and some will suffer severe disease.” 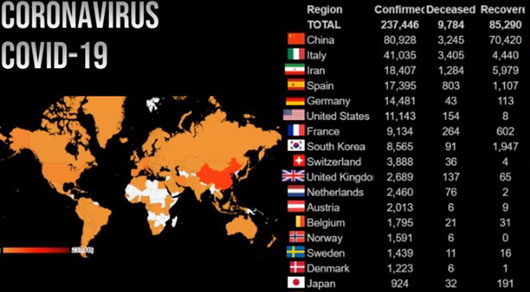 Not surprisingly, the corporate media jumped into action and immediately interpreted the WHO director’s comments as evidence that the coronavirus is deadlier than feared. Twitter was buzzing with speculation about Covid-19’s real death rate.

The news spread so far so fast that President Donald Trump took to Fox News on March 5 to try and restore calm: “I think the 3.4 percent number is really a false number. Now, this is just my hunch, but based on a lot of conversations … personally, I’d say the number is way under 1 percent.”

Data suggests that the 3.4 percent number, as Trump suggested, is a “false number.” But it was too late, and what ensued was one of the greatest panics in world history, analysts say.

“A stream of similar opinions in the New York Times and from CNN, reminded me of Machiavelli’s historical observation that ‘whoever controls the people’s fears becomes master of their souls,’ ” Angelo Codevilla noted in a March 18 analysis for American Greatness.

It would be fine if the politicians and corporate media talking heads who advocate for the shutdown “were doing so in a politically dispassionate manner,” Codevilla wrote. “But no. Almost uniformly, such advocacies are at least as much about Donald Trump as about the coronavirus.”

Those who fault the president’s response to the virus “would be a lot more credible had they not spent the past three years blaming him for everything imaginable. Also, their credibility would rise to threshold level were they not so obviously inconsistent in their advocacy of domestic shutdown and of open external borders,” Codevilla noted.

The establishment’s pundits and politicians “who cheer for higher death tolls from the virus and for more straitened circumstances, especially for their independent fellow citizens, who blow upon the flames of panic, all the while indicting their socio-political enemy, must imagine that enough people in their audience are fearful enough to have abandoned all critical faculties — fearful enough to follow the fear-mongers,” Codevilla wrote.

“Thus they are showing that the virus of partisanship has already hurt America far more than the coronavirus ever can.”

The establishment’s “formula for achieving such mastery has not changed in millennia: stoke any fear, turn the fear to hate of whomever and whatever you accuse of standing in the way of safety, and make yourself the agent of that hate,” Codevilla wrote.

“The formula works when its dynamic embeds itself in the masses’ behavior — even when the master himself is the one to be feared. That is because stampeding humans readily give up their souls and become no more mindful of their own interest than steers. Hence, whoever manages to madden crowds while directing their hysteria onto his enemies stands to reap power.”

Our 21st-century “developed” world, which so touts its own rationality, “is now engaged in the historically unprecedented attempt to shut down most social and economic intercourse for the sake of mitigating the effects of a virus the lethality of which is far more like recent strands of the flu than that of the plague,” Codevilla wrote. “One reason we do not know how many persons have been infected by this virus is that most infections in most people are so mild as to be unnoticed. That is also why we do not know the virus’s true lethality. Of course it is especially lethal to the old and otherwise infirm. What isn’t?”

Codevilla continued: “Hence, we really have no basis for believing that, left unchecked or dealt with as just another round of seasonal respiratory diseases, the coronavirus would devastate modern life. After all, having no cure for it any more than 17th century Europeans had for the plague, the only real weapons we have against it are the same that served long ago: heightened hygiene, social distancing, quarantine and self-quarantine. It is not clear what good the rest of the restrictions do.”

Meanwhile, “we have far better basis to gauge the effects of what the ‘developed’ world’s governments are doing to our societies and economies, and to judge that these measures are certain to reduce the general population’s prosperity and quite likely to result in a substantial transfer of even more power to those who already have too much of it,” Codevilla wrote.

“Why then do so many in high places advocate this global shutdown so vehemently? And does the question answer itself?”

Amid the outbreak, “at best, if those who suffer receive from the government as much money as they lost from forgone labor, they will merely have traded independence for dependence. Few will be happy about that — except those in charge of managing the dependence,” Codevilla noted.