Escape from ‘Hotel California’: Thousands of firms check out, head to Texas and points East

Thousands of companies are checking out of the “Hotel California” – and leaving – having split the Left Coast for greener pastures in the East.

Texas, Florida, Georgia and North Carolina are among the prime beneficiaries as 9,000 businesses have fled California’s “hostile” business environment, according to a study by Joseph Vranich, a site selection consultant and president of Irvine, California-based Spectrum Location Solutions. 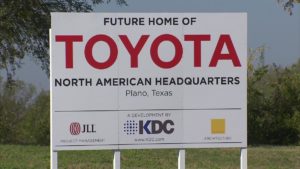 Vranich said companies are eagerly leaving California behind and experiencing operating cost savings of up to 35 percent. He said in an email to the Dallas Business Journal that he considers the results of the seven-year, 378-page study “astonishing.”

“I even wonder if some kind of ‘business migration history’ has been made,” Vranich said.

The study found that many of the 9,000 businesses relocated completely while others kept their headquarters in California but targeted out-of-state locations for expansion.

Toyota bolted Torrance, California and is consolidating its North American headquarters in Plano, Texas, where it will employ 4,000 workers.

While Texas was the top destination of companies checking out of California, Virginia, Georgia, Florida and North Carolina have also benefited greatly.