The latest Rasmussen Reports survey found 50 percent of likely voters against conviction and 45 percent in favor. 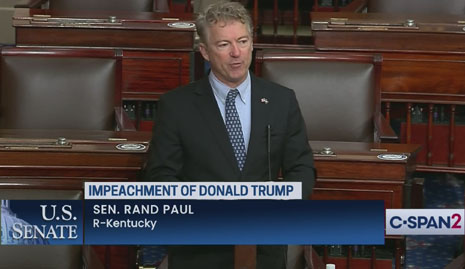 Republican senators have already said that Democrats are far short of the votes needed to convict Trump on a charge of “incitement of insurrection” for the storming of the U.S. Capitol on Jan. 6.

But Democrats, who stopped caring long ago about what the American people believe, are pressing ahead with the trial, which is expected to begin on Feb. 8.

“Make no mistake, there will be a trial, and the evidence against the former president will be presented in living color for the nation and every one of us to see once again,” said Senate Majority Leader Chuck Schumer.

The House Democrat impeachment acolytes will need to conjure 17 Republican votes in order to convict Trump.

Sen. Rand Paul’s motion to declare the trial unconstitutional ultimately failed because Democrats opposed it, but 45 GOP senators voted to affirm the Kentucky Republican’s view, delivering an almost certain fatal blow to the House’s case and risking further angering the American public by spending millions of taxpayer dollars on a trial they can’t win.

“If you voted that it was unconstitutional, how in the world would you ever vote to convict somebody for this?” Paul told reporters. “This vote indicates it’s over. The trial is all over.”

Ahead of the vote on his motion, Paul said Democrats were “angry, unhinged partisans, deranged by their hatred of the former president.”

“Shame on those who seek blame and revenge, and who choose to pervert a constitutional process while doing so,” Paul said on the Senate floor. “I want this body on record — every last person here.”

In the Rasmussen poll, 57 percent of respondents said they fear the Democrat show will “cause more division” in the nation. . Just 19 percent said they think the trial will unite America.

Rasmussen said that 80 percent of GOP voters want Trump acquitted, and 75 percent of Democrats want him convicted. Among voters unaffiliated with a party, 54 percent say Trump should be acquitted.