The emails show exchanges between city officials in several Wisconsin cities and members of the Center for Tech and Civil Life (CTCL), a leftist election advocacy organization based out of Chicago, Just the News reported on April 15. 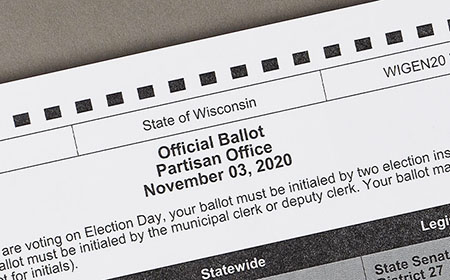 The emails were obtained by the election integrity group the Amistad Project.

“CTCL has been the subject of controversy since last year when it distributed a multimillion-dollar series of grants targeted to Democrat strongholds in Wisconsin. The grants were meant to help shore up the cities’ voting systems and promote safe voting amid the Covid pandemic,” the report said.

In the fall of 2020, CTCL announced that Facebook founder Mark Zuckerberg had sent the group a $250 million gift to help expand those operations to more cities nationwide.

CTCL awarded over 2,000 grants to various jurisdictions around the U.S. during the 2020 election.

In Wisconsin, CTCL was partnering with several other groups to manage the election in multiple Wisconsin cities.

Among the participating groups is the Center for Civic Design (CCD), a group whose mission is in part to redesign voting ballots in order to “make every interaction between government and citizens easy, effective, and pleasant.”

Emails from August of 2020 show officials in Racine, Green Bay and other Wisconsin cities receiving absentee ballot instructions and envelopes designed by the CCD, with an official from the CTCL noting that they have funds available to print the materials.

“Please let CTCL & CCD know how we can be most helpful moving forward,” two CTCL staffers tell the city officials. “If it’s useful, grant funds are available for cities that want to print new envelopes.” (The Wisconsin Elections Commission would eventually direct municipalities throughout the state to use a uniform envelopment format.)

The Maryland-based CCD is funded in part by Democracy Fund, a significant source of funds for leftist groups and causes.

Also partnering with the CCD is the Center for Secure and Modern Elections (CSME), a group which is in turn supported by Democracy Fund and which is “a fiscally sponsored project of New Venture Fund.” The New Venture Fund itself is managed by Arabella Advisors, a consulting group and a major funder of leftist causes, Just the News noted.

In an August email exchange, a Green Bay official proposed that CSME help develop both Spanish-radio ads and “geofencing” campaigns, in which voters are targeted — most often by cell phone data — within a pre-defined geographical area.

Celestine Jeffreys, then the chief of staff for Green Bay Mayor Eric Genrich, told CSME’s Eric Ming that the city was “eager to get started on a media campaign” using the organization’s help. Following a scheduled conference call with Ming, Jeffreys wrote: “We had a very nice conversation and I’m ready to roll!”

Also appearing in the emails offering management support throughout 2020 is the Elections Group, an organization that “partner[s] with state and local election officials looking to implement new programs or improve processes for voters and stakeholders.”

That group, which partners with numerous other organizations including the Center for Civic Design and the Center for Tech and Civic Life, is run in part by Jennifer Morrell, a “recognized expert in election audits.” Morrell serves as a consultant with Democracy Fund, at which she leads the Election Validation Project, the Just the News report noted.

Also involved in the planning was the National Vote at Home Institute, a group that bills itself as “dedicated to making sure every American can vote in secure, safe, accessible, and equitable elections by expanding vote-at-home systems in all 50 states.” Among the group’s “circle of advisors” are Morrell, CTCL founder and executive director Tiana Epps-Johnson, Democracy Fund senior advisor Tammy Patrick, and Center for Secure and Modern Elections Director Jake Matilsky.

None of the groups named in the emails responded to queries from Just the News seeking more information about the extent of their involvement in Wisconsin’s management of the 2020 election. Jeffreys also did not respond to queries.

The organizations, meanwhile, “have continued their advocacy of certain progressive-aligned policy initiatives” into 2021, the report noted.