Arizona Republican Gov. Doug Ducey on Friday vetoed 22 pieces of legislation passed by the state legislature, including an election integrity bill and a bill that would ban the use of taxpayer dollars for critical race theory training. 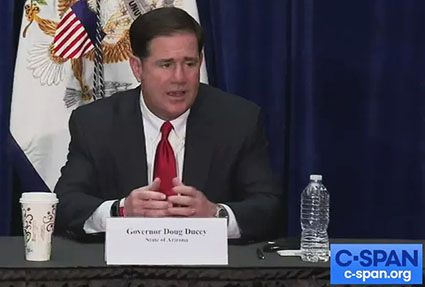 Ducey tweeted: “Some are good policy, but with one month left until the end of the fiscal year, we need to focus first on passing a budget. That should be priority one. The other stuff can wait.”

One of the vetoed bills, HB 2792, sponsored by state Rep. Jake Hoffman, would ban the mass mailing of ballots to voters that did not request them.

House Speaker Rusty Bowers said in a statement that he was disappointed in the vetoes from Ducey: “Truthfully, I’m not happy about it,” Bowers said, adding that it was a valuable “civics lesson reminder that it takes 31-16-1 to be successful here. Sometimes we forget about the one.”

Kelli Ward, the chairman of the Arizona GOP, said it was “ridiculous” that Ducey vetoed the bills given that the legislative branch had passed them all after working “all session” on them. “This tyrannical approach is dangerous to what We The People in Arizona support,” she added.

State Rep. Mark Finchem, who is currently running to replace Democrat Katie Hobbs as Arizona’s secretary of state, told Steve Bannon’s War Room that Ducey’s behavior was basically a “manchild temper tantrum,” and that it is just retaliation for the legislature refusing to pass “a budget that has so much pork in it, you’d think we were going to a barbecue.”

Finchem said Ducey was “attempting to act as a petty dictator,” especially given that the Legislature still had 30 days to pass a budget. “For him to do something like this is beyond the pale,” he added, noting he would no longer defend Ducey from recall petitions.

Ducey added: “Once the budget passes, I’m willing to consider some of these other issues. But until then, I will not be signing any additional bills. Let’s focus on our jobs, get to work and pass the budget.”