Egyptian airstrikes on the stronghold of the Islamic State (ISIS) affiliate in North Sinai killed 12 jihadists, the Egyptian military said on June 20. 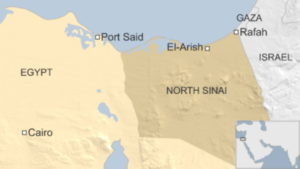 Egypt says Sinai Province is responsible for the killing of hundreds of soldiers and police and has killed more than 100 people in recent bombings at Coptic Christian churches.

Egypt’s Interior Ministry also reported that police forces stationed on a highway in the northern Sinai city of El-Arish stopped a jihadist attack that targeted their checkpoint on June 19.

The ministry said the police were stationed at a coastal road and were approached by a suicide bomber in a vehicle.

In a separate operation, the Interior Ministry on June 20 said Egyptian forces killed three jihadists in Alexandria who were linked to a terror group calling itself the Hasm Movement.

The Hasm Movement, suspected of links to the banned Muslim Brotherhood, claimed responsibility for a deadly roadside bombing earlier this week. The bombing in Cairo’s upscale suburb of Maadi killed one police officer and wounded four others.