Editorial: USA or CPUSA? The illusion that is destroying America

2020 has been like a bad movie in a theater with no exits.

Journalist Rowan Scarborough of The Washington Times summed it up in a social media post:

“Don’t let the destructive Left Wing mobs, New York Times and CNN get you down. We live in the freest country on Earth, dedicated to a more perfect union every day. We are the systematic anti-racist society. We devote laws, money, courts, workplaces to aid the pursuit of happiness. The world votes for America every year. We welcome over 1 million immigrants, more than any country, and they ain’t white. They arrive from every ethnic background ready to dream America. There are waiting lists for people to enter our free enterprise anti-racist society. They must know something NYT does not.” 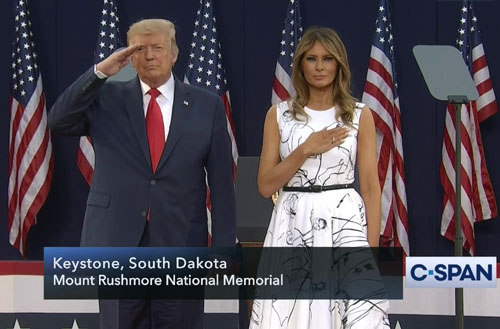 Those words of truth are a great morale booster on this July 4 weekend. But in the year 2020, they are not enough. The great American nation is in danger because the people you love are being misled in a big way by the major media. They are bowing to the dictates of tyrants in local government, public education and the unrelenting virtual media construct posing as reality.

There is a word for this: Brainwashing.

The images and messages being disseminated to the world are an illusion which in no way tracks with objective reality or the essence of America.

A 15-year-old conservative called in to the Rush Limbaugh show last week to ask how to fight back. Limbaugh responded that all Americans should remember that the Left in no way owns the moral high ground, all arrogant presumptions to the contrary notwithstanding.

We at WorldTribune.com are publishing our first-ever editorial because these are extraordinary times. America could actually become a one-party state under the Communist Party USA. Those in the know understand how catastrophic that would be.

At such times, however, extraordinary solutions emerge. One unlikely person has demonstrated the enormous potential of each American’s initiative.

The arrival of President Donald Trump marked the first U.S. political leader in modern history with no discernible ties to Washington, D.C. That fact in addition to his courage, love of nation and remarkable energy immediately made him a global phenomenon and force to be reckoned with. Instead of being played by the Chinese Communists and the corporate media, this former Reality TV star played them.

Related: President Trump at Mt. Rushmore: ‘They want to silence us, but we will not be silenced’, July 4, 2020

Many religious leaders privately believed the hand of God was upon him. But he is only one man. What are his chances against the powerful forces arrayed against him and this nation?

The most important contribution any leader can make is the example he or she provides.

Donald Trump is a template demonstrating to all Americans what one conscientious person can and must do in dangerous times. It reminds us of the precedent our Founding Fathers set when in signing the Declaration of Independence they pledged “Our lives, our fortunes and our sacred honor.” Or our nation’s heroes when they sacrificed their lives for their nation, their fellow citizens and foreigners they could not even communicate with.

No president is without flaws. Such is the universal condition of all humanity that fell from grace in the Garden of Eden.

At Mt. Rushmore on July 3, President Trump exuded the spirit of Americans in 1776. These men left their homes and their pews, took up arms and fought to establish a nation that would be free of tyranny. They had nothing to gain and everything to lose. They consciously sacrificed for future generations. We are the beneficiaries.

That means you and me: The boomers, Gen X, Millennials and Gen Z. What we inherited was a nation that outlawed slavery, fought two world wars, led the global industrial and technological revolutions and inspired the world with its generosity, magnanimous spirit and most of all hope.

These achievements were highlighted by the president in his stirring and historic speech at Mt. Rushmore.

If many of the paid nihilists now toppling statues, torching businesses and instigating violence and destruction were able to experience the realities of life outside America they would soon realize why so many of “the people” in all corners of the world would risk everything to come here.

In 1776, tyranny was represented by Great Britain. In 2020, tyranny is represented by the Chinese Communist Party, militant Islam, the hydra-headed Left and their ultra-powerful corporate and media enablers.

And which city represents this monster that threatens to devour the world?

How is this even conceivable?

Washington for most Americans has in essence been a monument representing the highest ideals of human endeavor rooted in our Creator, God. We were awed in our youth to see its statues, museums and majestic buildings and to walk as tourists through its halls of power.

The war on America that sought to replace that greatness has through the years incrementally corrupted its idealists and rendered the “capital of the Free World” a Matrix of power and money. The Swamp. Where there had been dramatic tension and debate between principle and pragmatism, we now find only a cesspool of near-total corruption.

This Matrix is not what America is all about. As evidence we see that the Matrix has focused all its power and wealth on ridding itself of President Donald Trump and punishing all who voted for and have supported him. There is nothing reasonable or rational about this all-out, 4-year crusade. It is being waged by a “totalitarian consensus” which is the enemy of America. It is either the paragon of goodness or of evil. For conscientious Americans the answer is clear.

We must look to the templates of our nation’s heroes and heroines, its Founding Fathers and President Donald Trump.

They did not wait for someone else to show up and take action. They did not hesitate. They risked everything. They abandoned their fears, their status, their treasure and their reputations. All to establish a “light unto nations.”

In 2020, inspired by those exceptional Americans, we can do no less. Our future generations and America itself, “one nation under God,” is at stake.

Only one person can resolve this: Me. That also means you. I have to do something about it. But what is the course of action?

The Left’s illusion must be shattered with the Truth. Not once, not twice but every time it rears its head, in real time.

Many Americans have given up waiting for a George Soros on the right to offset the overwhelming media bias that is brainwashing our children. After all, a subsidized solution is no solution at all. Instead, they have joined the fight on social media, sharing articles from WorldTribune and other alternative media with their networks.

But the Silicon Valley titans are part of the hydra-headed monster we are all battling. They are heavily suppressing alternative media voices large and small while amplifying the approved narrative of the totalitarian consensus.

A better solution is to wage the media war directly by becoming citizen journalists using the resources by our friends at the Free Press International news service which spotlights the most important news and opinion by WorldTribune.com and other alternative media that is being missed or buried by the corporate media bullies.

More and more Americans are starting their own YouTube broadcasts, e-letters, community newspapers and podcasts using the resources of the FPI news service.

One prime example is John McNabb, chairman of the Advisory Board at Free Press Foundation and a columnist at WorldTribune.com. Consider also the former Washington insiders-gone-rogue who have started a daily podcast this year at WashingtonExpose.com.

Others are simply sending FPI news and commentary along with their own to their friends, family and colleagues. By taking advantage of this news service, they can bring credibility and professional news standards to their presentations. And they can take a stand and make a difference.

Remember, it is up to each one of us to think for ourselves, safeguard our families and restore the social contract that helped make American great.

Sharing this editorial on social media will go as far as those mind control specialists will allow. Email it to those you care about.

Doing nothing is unthinkable. Surrendering to the Mob risks losing the precious legacy of Freedom for our descendants that was left to us.

Taking action brings fortune for future generations and the fulfillment that makes life worth living — in a word, happiness.

Truth, the Free Press and I will vaporize the totalitarian illusion. When we speak out, our voices will be heard. When we take a stand, order will be restored.

May God bless you, your family and America!