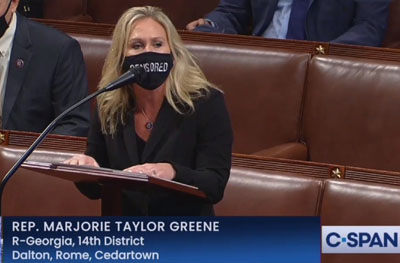 Greene has said she chooses “people over politics,” doesn’t like socialism, and is an unapologetic supporter of President Donald Trump. According to the leftist playbook, that makes her a “domestic terrorist.”

California Democrat Rep. Jimmy Gomez said on he will introduce a resolution to expel Greene “in light of numerous reports revealing her repeated endorsements of sedition, domestic terrorism, and political violence.”

Gomez also accused Greene of “racist, Islamophobic and anti-Semitic attitudes” such as advocating “that Muslims should be barred from serving in government.”

“Such advocacy for extremism and sedition not only demands her immediate expulsion from Congress, but it also merits strong and clear condemnation from all her Republican colleagues,” Gomez said. “Her very presence in office represents a direct threat against the elected officials and staff who serve our government.”

A spokesman for Greene told CBS News she had no plans to resign.

The Constitution provides that either chamber may expel a member, but only upon a two-thirds vote.

Without significant Republican support, Gomez’s resolution has no chance of succeeding, which Democrats only control by a 222-211 margin.