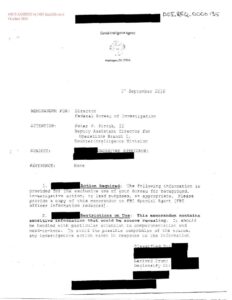 [Director of National Intelligence John Ratcliffe] declassified on Tuesday portions of a formal CIA investigative referral sent on Sept. 7, 2016, to fired former FBI Director James Comey and fired former counterintelligence official Peter Strzok asking them to investigate the Clinton campaign’s anti-Trump collusion smear operation in light of Russia’s knowledge of the plan and the likelihood it could be tainted by deliberate Russian disinformation.

Rather than act on the CIA investigative referral in the same manner they had launched a full-blown counterintelligence investigation of the Trump campaign, Strzok and Comey refused to initiate an investigation.

“Per FBI verbal request, CIA provides the below examples of information the CROSSFIRE HURRICANE fusion cell has gleaned to date,” the memo states. “An exchange [REDACTED] discussing US presidential candidate Hillary Clinton’s approval of a plan concerning US presidential candidate Donald Trump and Russian hackers hampering US elections as a means of distracting the public from her use of private e-mail server.”

The cover note of the memorandum stated that the information within was provided to the FBI “for the exclusive use of your Bureau for background, investigative action, or lead purposes, as appropriate.”  … The CIA referral, specifically its reference to a “CROSSFIRE HURRICANE fusion cell,” suggests that the Obama administration’s anti-Trump investigation may not have been limited to the FBI, but may have included the use of CIA assets and surveillance capabilities, raising troubling questions about whether the nation’s top spy service was weaponized against a U.S. political campaign.