And although the state’s supreme court struck down her emergency powers at the beginning of October, Michigan Democrat Gov. Gretchen Whitmer still insists “Thanksgiving is going to look different this year.” 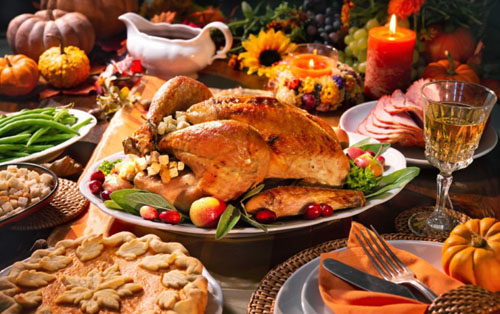 Lightfoot on Thursday issued a stay-at-home advisory and called on residents to cancel their “traditional” Thanksgiving plans.

Lightfoot said the advisory will take effect on Nov. 16 and will last 30 days.

Lightfoot warned that if people were seen not acknowledging capacity limits, which is set at 10 for private gatherings, there would be consequences.

“If we see you violating these rules in any way, we’re not going to hesitate to take action,” she said.

Whitmer said that “medical experts across the country strongly recommend that we do not host Thanksgiving with people from outside of our own households. I know this will be hard, but we cannot afford for people to head to a family member’s, friend’s, or loved one’s house for Thanksgiving, contract the virus, and bring it back to their communities and their homes.”

Instead of large Thanksgiving gatherings, Whitmer suggested families organize a video call to celebrate, or share photos with each other later.

In North Carolina, Democrat Gov. Roy Cooper tightened restrictions on indoor mass gatherings, dropping the maximum allowed gatherings from 25 people to 10 people. He said he is targeting family groups and community gatherings, like those held around Thanksgiving.

The new limits, which take effect at 5 p.m. on Nov. 13, won’t apply to schools or churches.

Cuomo, who recently wrote a book congratulating himself on his supposed success in “controlling” the pandemic, also announced stricter limitations on businesses and added curfews as he warned that the state will go back to a “closedown” if the infection rate doesn’t adequately drop.

“If these measures aren’t sufficient to reduce the spread—we’ll turn the valve more and part of that would be reducing the number of people indoor dining,” said Cuomo at a press conference. “If that doesn’t work, if these numbers keep going crazy … you will go back to a closedown.”

Betsy McCaughey, the former lieutenant governor of New York, ripped into the governor as a “petty tyrant” over the new restrictions and advised the public not to abide by his “petty, despotic edicts,” according to Fox News.

“The governor is pushing New York into absolute economic destruction, already with an infection rate well below the national average,” McCaughey said during an appearance on “Varney & Co.” “New York’s unemployment rate is nearly double the national average, and it leads the nation in business failures.”

The residence restrictions … really ought to be opposed on the grounds that they are an odious infringement on personal liberty. Reasonable people—even reasonable libertarians—will disagree on how much and to what extent the government should curtail our behavior in order to fight the pandemic. But telling people what they can and cannot do in their own homes is a bridge too far. If you want to have 25 people over to your apartment for a party, it may be inadvisable (depending on where you live and who you are inviting), but it is your right. A government that can legally prohibit everyone in an entire state from hosting a familial number of guests within their own private residences is essentially unconstrained in a major sphere of American domestic life.