Democrats like to say that the more voters there are, the better their chances are. So, why not register Americans to vote at birth?

It’s a novel idea from a local Democratic leader in Washington state, and a Democratic Party shell-shocked at losing elections is said by insiders to be reviewing any and all options. 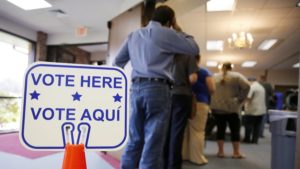 “Democrats have been on the defensive,” said Tina Podlodowski, chairwoman of the Washington State Democratic Party. “We’ve tried to get on the offensive, and I think people are starting to listen more and more to that.”

Podlodowski, herself a former candidate for secretary of state, noted that other countries take bold steps to make sure everyone can vote – including registering people at birth.

“If you look at different countries, European countries or Scandinavian countries, basically folks walk in when they’re 18 and they just start voting and don’t have to register,” she said. “Because they were registered at birth.”

In Nevada and New Mexico, a liberal group is pressuring the legislatures to let people register when they get driver’s licenses.

In Ohio, progressive activists have thrown their support behind a mayoral candidate because she fights with Republicans about voting access.

“Across the country, Democrats and their allies are plotting a quiet and disjointed but considerable push to make voting easier by dismantling registration barriers and promoting candidates who want to expand voting rights,” McClatchy reported on March 31. “It’s all an effort to reshape the electorate by creating new Democratic voters.”

The push to expand voting rights started in 2013, according to Jonathan Brater, counsel at the Brennan Center for Justice’s Democracy Program. Since then, 26 states have passed laws that have made voting easier.

On the other hand, 20 states that have made voting more restrictive, Brater said, in part thanks to bipartisan efforts in states such as West Virginia, where Republicans last year backed the creation of an automatic voter-registration system.

Democracy for America has decided to make voting rights a criterion for endorsements. The group has thrown support to Yvette Simpson for mayor of Cincinnati after she fought for voting rights for her constituents as a city councilwoman.

Liberal advocates say installing elected officials who back expanding voting rights – even in non-legislative positions – is an important part of their strategy.

“Both in the short and long term, we need leaders in Washington and statehouses across the country who understand that we need to be working to make it easier to vote, not harder,” said Neil Sroka, Democracy for America spokesman. “The easiest way to get national and state leaders committed to expanding access to the ballot is by electing local leaders today who understand and have already taken action to protect voting rights in their local communities.”

Podlodowski said the Democratic Party might eventually consider a more sweeping change to existing laws: pushing a national standard for voting access. Currently, each state makes up its own rules and regulations.

“Maybe it’s time to have that discussion,” she said. “What makes sense at a national level?”