Dec. 19 is the new D-Day for the never-die, anti-Trump Left

The nonstop wall of sound from the mainstream media is about disarray and chaos in the Trump transition.

That is a totally false narrative according Trump Senior Advisor Kellyanne Conway. Officials who are in negotiations for top positions with the incoming administration have conveyed the same assessment. 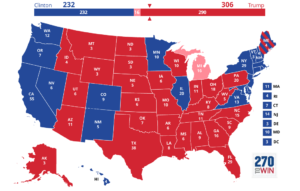 The real buzz in Washington is about the lineup of new players in town. But it is also about rumors a George Soros-fueled effort to once and for all throw the election to Hillary Clinton.

The plot would involve new revelations and scandals and petition calling on “faithless” electors to take action. One such petition by Change.org, now signed by more than 4.3 million people, encourages members of the Electoral College to cast their votes for Hillary Clinton when the college meets on Dec. 19.

The petition argues that Donald Trump is “unfit to serve” and that “Secretary Clinton WON THE POPULAR VOTE and should be President.”

“If they all vote the way their states voted, Donald Trump will win,” the petition states. “However, they can vote for Hillary Clinton if they choose. Even in states where that is not allowed, their vote would still be counted, they would simply pay a small fine – which we can be sure Clinton supporters will be glad to pay! We are calling on the Electors to ignore their states’ votes and cast their ballots for Secretary Clinton.”

While that scenario is possible, it is not likely, Laurence Tribe, a professor of constitutional law at Harvard Law School, told USA Today.

“Presidential Electors are theoretically free to vote as their consciences dictate, something the founders anticipated Electors would indeed do under Hamilton’s Electoral College invention,” he said.

Tribe said the constitutionality of imposing a fine on a “faithless elector” is “open to doubt, and it is even more doubtful that a court would compel any Elector to be ‘faithful’ to the State’s winner-take-all outcome. Nor is it likely that the Vice President, who presides over the process of opening the Electors’ ballots and counting the votes cast by the 538 Electors, would feel free to ‘correct’ a faithless Elector’s vote. So, in theory, if enough Electors pledged to Mr. Trump decline to make him President-elect and vote instead for Secretary Clinton, she would become the President-elect and would be the 45th President upon taking the Oath of Office on January 20, 2017.”

Both President Barack Obama and Clinton herself would likely oppose that outcome since both have acknowledged Trump’s victory and called on Clinton’s supporters to accept it.

“In the current situation, where both incumbent President Obama and the candidate who won a popular majority nationwide, Hillary Clinton, have made such a huge point of accepting Donald Trump as the President-elect, and where both Obama and Clinton have repeatedly insisted that such acceptance is vital to the peaceful transition our democracy requires, I frankly cannot imagine either of them supporting the proposed move to have the Electoral College elect the former Secretary of State on Dec. 19,” Tribe said. “And, without their support, the move seems doomed to fail.”

Another hurdle is in place that is seemingly impossible for the Soros-driven effort to clear – the electors are chosen by the state parties.

“The electors are mostly people connected to the political party leadership in their states,” Richard Pildes, a professor of constitutional law at New York University School of Law, told USA Today. “So if you try to picture how this might happen, it would have to be the party leadership in some group of states that is convinced to abandon Trump.”

Kermit Roosevelt, professor of law at the University of Pennsylvania Law School, said that while there is “no clear requirement in the Constitution that electors vote for the candidate they’re pledged to … it’s very unlikely that defections will happen now.”

According to FairVote, there have been 157 “faithless electors” in the history of the U.S. Of those, 71 votes were changed because the original candidate died before the Electoral College cast its votes. FairVote said that “82 electoral votes were changed on the personal initiative of the elector.” None has affected the outcome of a presidential election.