‘Day Without Immigrants’ planned: ‘Without us this country is paralyzed’

Immigrants in California planned to hold a “Day Without Immigrants Boycott” on Feb. 16 to show just how vital they believe they are to the United States and its economy. 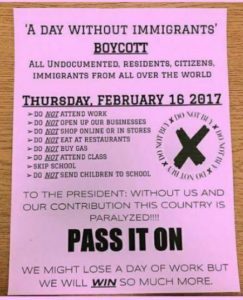 A flyer for the event proclaims: “Without us and our contribution this country is paralyzed … We might lose a day of work but we will WIN so much more.”

The flyer encourages “undocumented, residents, citizens, immigrants from all over the world” to participate in the protest as follows: “Do not attend work; do not open up our businesses, do not shop online or in stores, do not eat at restaurants, do not buy gas, do not attend class, skip school, do not send children to school.”

The “Day Without Immigrants” protest was also being planned for residents of Washington, D.C., with many restaurants making plans to operate on short staffs and/or close for the day while public schools were forced to make contingency plans for walkouts, CNN reported.

According to several news reports, the anxiety level of illegals rose substantially last weekend after U.S. immigration officials had launched countrywide raids and arrested hundreds of illegal aliens across the nation as a result of President Donald Trump’s immigration executive order.

“The crackdown on illegal criminals is merely the keeping of my campaign promise. Gang members, drug dealers & others are being removed!”