Democrats, who just over four years ago mocked GOP presidential candidate Mitt Romney’s warning on Russia, are now pushing the narrative that Moscow’s meddling in the 2016 election was an “act of war.”

“I think this attack that we’ve experienced is a form of war, a form of war on our fundamental democratic principles,” Rep. Bonnie Watson Coleman, New Jersey Democrat, said during a House Homeland Security Committee hearing last week. 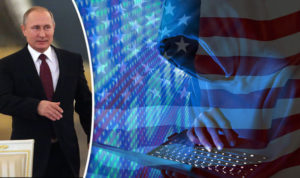 “I actually think that their engagement was an act of war, an act of hybrid warfare, and I think that’s why the American people should be concerned about it,” said Rep. Jackie Speier, California Democrat.

“This past election, our country was attacked. We were attacked by Russia,” said Rep. Eric Swalwell, California Democrat. “I see this as an opportunity for everyone on this committee, Republicans and Democrats, to not look in the rear-view window but to look forward and do everything we can to make sure that our country never again allows a foreign adversary to attack us.”

Michael Schmitt, an international law professor at the University of Exeter in Britain said that he finds “that sort of talk dangerous.” Schmitt led the team of legal experts that formulated the Tallinn Manual 2.0, a comprehensive analysis of how international law applies to cyberspace.

Schmitt said Russia’s hacking was not an act of war but a violation of two prohibitions: one on violating another state’s sovereignty and another on intervention into another state’s affairs.

“Without a scintilla of a doubt, it is not an act of war,” Schmitt said.

Gen. Mark Milley, chief of staff of the U.S. Army, also cautioned individuals about using the term “war” to refer to the cyberattacks: “If it’s an act of war, then you’ve got to start thinking of your response to that sort of thing.”

Zero Hedge noted on March 26 that “if hacking and/or seeking to influence the outcome of elections is truly an ‘act of war’ as these Democrats suggest, then we would kindly remind them that their former leader ‘declared war’ on the majority of the civilized world during his eight years in office.”

Courtesy of WikiLeaks, here is a list of some of the individuals who were wiretapped by the Obama administration: