Dangerous, deadly, daring: Remembering the day when young Americans put it all on the line

Today is the day that many around the world remember as D-Day, and many Americans will not easily forget those who lost their lives on the beaches of Normandy on that day. Those of the “greatest generation” who served their country in the time of war, especially on D-Day, June 6, 1944, deserve to be remembered for sacrificing their lives that freedom could survive.

Many young Americans volunteered after the attack upon Pearl Harbor, and then went off to Europe to fight against Hitler and the Nazis. Sadly, far too many of those teens and men who volunteered to fight in the military never made it back home. And a great many lost their lives on June 6, 1944. 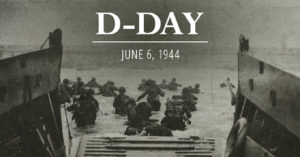 Today is very different than it was so long ago. Although cities suffer terrorist attacks and innocent people lose their lives, the carnage of all-out war, with nations embroiled in battle determined to inflict destruction and death, is much worse. War is hell on earth — all out evil unleashed upon humanity — the opposite of the purpose of human existence. Yet, in a world where freedom itself is threatened, there is true purpose in defending the precious freedoms humanity as a whole have attained. Today is a bit more peaceful than almost an entire world at war.

In 1944, almost the entire world was affected by the war, and in Europe D-Day was a very crucial turning point in WWII. D-Day represented the initial effort to open a third front to force the German military back to their homeland.

The assault on the beaches at Normandy was an incredibly complex effort in a three-pronged thrust to push the German troops back within the borders of German territory. After the Soviet Army had fought for so long on the Eastern Front, and the British and Americans had successfully battled through Italy, the “invasion” of France provided the third direct assault, and the beginning of the end for the Third Reich.

This most critical assault, more formally known as “Operation Overlord,” was the initial day of the Allied invasion against the German divisions. D-Day, or the initial beach assault phase code-named “Operation Neptune,” began in the wee morning hours of June 6th in 1944 with the largest amphibious military invasion in world history. This all-out invasion against the entrenched Nazi military fortifications spread across 50 miles of French coastline at Normandy.

The attack was not only comprised of the amphibious assault of five Normandy beaches, it also included a massive naval bombardment, as well as an airborne assault involving 10,000 Allied aircraft striking at the German defenses, and the dropping thousands of paratroopers behind enemy lines shortly after midnight preceding the dawn coastal landings.

D-Day was definitely dangerous and deadly; it was an act of desperation, but it was also an act of daring. “Neptune” actually lasted through the end of June. According to the D-day museum:

… Operation Neptune began on D-Day (June 6th 1944) and ended on 30 June 1944. By this time, the Allies had established a firm foothold in Normandy. Operation Overlord also began on D-Day, and continued until Allied forces crossed the River Seine on 19 August 1944.

This complicated, yet meticulously planned, initial thrust of Operation Overlord proved successful, and by the end of June, 1944, Allied troops had established complete control of Normandy beaches. Then, the soldiers managed to fight their way across the River Seine by August 19, 1944, at which time Operation Overlord essentially ended by accomplishing the objective of driving deep into Nazi-controlled France before the end of the summer.

Operation Overlord was an effort not only intended to liberate portions of occupied France, but also it represented the initial attack of a more massive and prolonged onslaught against German forces that served to open up a western front in Europe designed to penetrate to the heart of Germany and break the Nazi war machine. D-Day eventually proved to be a pivotal moment in the fighting in Europe during World War II. Operation Neptune managed to crack the powerful Nazi grip on occupied France.

This Allied thrust was essentially the beginning of the end of the German military machine that would collapse in less than a year. This complex and deadly invasion of Normandy was a final component of a military strategy that fundamentally pressed in like a vise upon the Germans; with the Soviet Red Army closing in from the Eastern Front, and the British and American forces pushing up into the underbelly of Germany through Italy. The attack on Normandy exposed the overextended German military to further Allied assault from a Western Front.

Needless to mention, it is important to remember that such men and boys gave their lives that representative government could survive, and that other people them would be able to continue to live in freedom.

Gen. Dwight D. Eisenhower was the Supreme Commander of the Allied Expeditionary Forces that unleashed this massive, cross-channel, frontal invasion of the German positions in Northern France. He had been a proponent of such a direct assault as early as 1942, but faced opposition from the British who feared a re-run of the devastating trench warfare of World War I. Eisenhower’s ideas were finally accepted by the Allied command on January 15, 1944. When he gave the orders to commence the attack, he revealed genuine hope for a victorious outcome:

You will bring about the destruction of the German war machine, the elimination of Nazi tyranny over the oppressed peoples of Europe, and security for ourselves in a free world. Your task will not be an easy one. Your enemy is well-trained, well-equipped, and battle-hardened. He will fight savagely … The free men of the world are marching together to victory. I have full confidence in your courage, devotion to duty, and skill in battle. We will accept nothing less than full victory. Good luck, and let us all beseech the blessings of Almighty God upon this great and noble undertaking.

The combined Allied effort on D-Day proved to be a decisive turning point in the war in Europe. By 1943, Hitler had taken over every nation in Europe except Great Britain, Portugal, Spain, Sweden, and Switzerland. Without the cooperation of all the Allies on D-Day, the outcome of the war in Europe may have been much different. One can imagine what the horrendous reality of that world could have been. Perhaps the world would have become much worse. It is good to reflect upon the value of D-Day and those who were willing to sacrifice their lives for freedom.

The better image to call upon could be one shared by President Franklin D. Roosevelt when he called upon Americans to join with him in prayer for ultimate success on June 6, 1944. In that prayer, Roosevelt defended the likes of the “greatest generation” before God:

Almighty God: Our sons, pride of our nation, this day have set upon a mighty endeavor, a struggle to preserve our Republic, our religion … our civilization, and to set free a suffering humanity …

Lead them straight and true; give strength to their arms, stoutness to their hearts, steadfastness in their faith …

Although D-Day belongs to the cobwebs of history and although the brave old soldiers are fading into the shadows, it is wise to remember this Day and the deeds of that generation. The brave men and boys who hit the beaches of Normandy made great sacrifices, not only on June 6th, but also throughout the war, and even after the war. Especially, their awesome sacrifice during the most devastating war in human history made a significant difference in the history of the world—a difference in preserving freedom.

May all Americans take a lesson from their sacrifice to defend freedom at the cost of their lives!

D-Day, Dangerous, daring: Remembering the day in 1944 when young Americans put it all on the line, deadly, WorldTribune.com