Cuomo threatens to close synagogues: ‘Religious institutions have been a problem’

Democrat Gov. Andrew Cuomo, who blames large gatherings in New York’s Hasidic community for spreading the coronavirus, is threatening to shut down synagogues if they don’t comply with his lockdown orders. 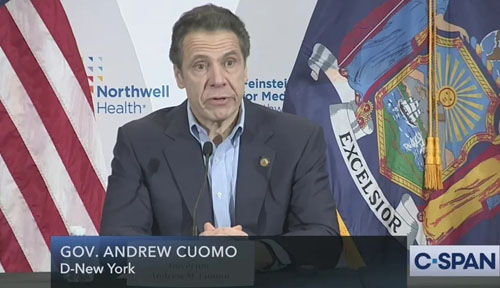 Cuomo’s lockdown order limits outdoor gatherings to 50 people. The governor said the Orthodox community has held gatherings of up to 1,000 people.

Cuomo said on Monday: “I have to say to the Orthodox community tomorrow, ‘If you’re not willing to live with these rules, then I’m going to close the synagogues.’ ”

In his bid to rein in the Orthodox community, Cuomo said that health department officials can monitor whether religious institutions are following coronavirus restrictions.

He offered the example of a Nassau County Department of Health Official who is stationed in front of St. Peter’s church:

“The capacity is 150,” he said, speaking as a hypothetical state official running the task force. “You stand at the front door. When they go over 75, you close the door and call me. And if you have any problem, the state police officer is down the block, and he will come help you.”

Cuomo on Monday also said he was ordering the temporary closing of public and private schools in several areas with large Orthodox populations. It will take effect Tuesday.

Many in New York’s Hasidic community feel the city is singling them out for criticism.

“People are very turned off and very burned out,” Yosef Hershkop, a Hasidic Jew from Brooklyn who works for a chain of urgent-care centers, told The Associated Press. “It’s not like we’re the only people in New York getting covid.”

David Ben Hooren, publisher of The Jewish Voice, said many Orthodox Jews in Brooklyn and Queens believe they have been unfairly targeted with stringent restrictions that aren’t being enforced elsewhere.

“The Jewish community feels they’re being singled out and there’s some element of anti-Semitism,” he said Monday. “Not that I agree with it, but that’s the sentiment in the street. Tensions are running high.”