‘Cruel hypocrisy’: Catholics slam Biden for claiming he is ‘guided’ by his faith

“Do not trust in deceptive words” — Jeremiah 7:4

Catholics are calling out Joe Biden for his continued attempts to deceive Americans of faith by claiming that his Catholicism “guides” his policies.

In response to an Oct. 29 essay by Biden which ran in The Christian Post, Lila Rose, founder of the pro-life group Live Action, noted that the Democrat candidate wholeheartedly supports “the state-sponsored killing of babies in the womb without limit.” Rose added that Biden’s Democrat policies are “the most lethal & cruel hypocrisy in American politics.” 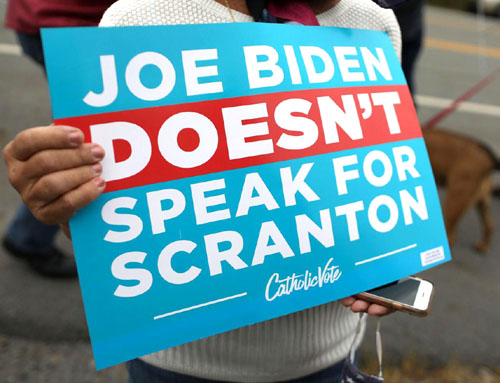 “You cannot claim to be a practicing Catholic and support the slaughter of children in the womb,” Rose said. “To do so is heinous and despicable. And you cannot claim you ‘didn’t know’ when your faith, and basic moral law, is telling you loud and clear: You shall not kill.”

Related: Wisconsin priest: ‘You cannot be a Catholic and a Democrat. Period.’, September 6, 2020

Breitbart’s Thomas D. Williams noted: “Somehow, in his 2,000-word essay, Mr. Biden never manages to explain how his Catholic faith guides his full-bore support for abortion-on-demand, or encourages him to persecute the Little Sisters of the Poor.”

The Little Sisters of the Poor is an order of Roman Catholic nuns who care for the elderly poor in homes across the country. Biden has promised to remove freedom of conscience protections which exempt the sisters from Obamacare’s “contraceptive mandate,” opening them back up to renewed lawsuits by the federal government for failure to provide contraceptives to their employees.

During the 2020 campaign, Biden has constantly played up how Scranton, Pennsylvania is his hometown.

But, shortly after his election as vice president in 2008, the then-bishop of Scranton rebuked Biden for his views on abortion.

“I will not tolerate any politician who claims to be a faithful Catholic who is not genuinely pro-life,” said Bishop Joseph Martino of Scranton in 2008. “No Catholic politician who supports the culture of death should approach Holy Communion. I will be truly vigilant on this point.”

In October 2019, Biden was refused Communion at a Catholic church in South Carolina.

“Catholic public officials who consistently support abortion on demand are cooperating with evil in a public manner. By supporting pro-abortion legislation they participate in manifest grave sin, a condition which excludes them from admission to Holy Communion as long as they persist in the pro-abortion stance,” says a 2004 decree signed jointly by the bishops of Atlanta, Charleston, and Charlotte.

Biden has said that one of his top priorities as president would be to “work to codify Roe v. Wade” into federal law, and that “his Justice Department will do everything in its power to stop the rash of state laws that so blatantly violate the constitutional right to an abortion.”

Biden has also said he would pass the Equality Act in the first 100 days of his presidency.

In a March letter to the U.S. Senate, three bishops said they opposed the Equality Act. The letter was signed by Archbishop Joseph Kurtz of Louisville, chairman of the U.S. bishops’ religious liberty committee; Bishop James Conley of Lincoln, head of the Subcommittee for the Promotion and Defense of Marriage; and Bishop Frank Dewane of Venice, chairman of the Committee on Domestic Justice and Human Development.

The bishops said the Equality Act would threaten the right to free speech, conscience and exercise of religion by making illegal certain beliefs about the human person – held by many individuals and groups. It would particularly threaten religious freedom, a foundational principle of the American founding, by exempting itself from the Religious Freedom Restoration Act, a move that the bishops noted is “unprecedented.”

“Joe Biden has campaigned on his Catholic faith while promising policies that contradict Catholic teaching and even threatening the Little Sisters of the Poor,” Ashley McGuire, senior fellow with The Catholic Association, told Fox News. “The Bishops Conference has warned of the devastating consequences of the Equality Act for religious liberty and for girls and women but Joe Biden supports it.”

Brian Burch, president of CatholicVote, said that Biden “has put himself on a collision course with the Catholic Church by promising to pass the Equality Act in the first 100 days of his presidency.”

“Biden’s aggressive support of the Act, together with his extreme abortion position, opposition to school choice, and pledge to restart the war on the Little Sisters makes clear his Catholic faith will be readily sacrificed at the altar of political expediency,” Burch said. “Come Tuesday, Catholics must understand the existential threat posed by a Biden-Harris ticket. Donald Trump remains the best – and only – choice for Catholic voters this election.”