Anarchists, via the Democratic Party, are holding America “hostage” in a “well-coordinated” effort to gain power, Rep. Dan Crenshaw said. 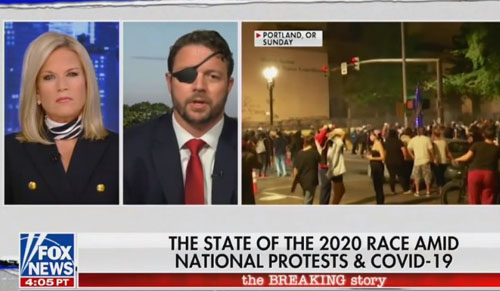 The Texas Republican, appearing on Fox News’s “The Story with Martha MacCallum”, said what America is seeing in Portland and several other cities is “a hostage crisis. You have a lot of violent left-wing mobs, Antifa mobs saying that if you don’t give us power, if you don’t give our political wing, the Democratic Party, power we’re gonna keep terrorizing your cities.”

“And here’s another thing,” Crenshaw said. “You look at words from Nancy Pelosi. What did she say? She says, you know, this is all Trump’s fault. If we were in power, none of this left-wing terrorism would be happening right now. So their messaging is coming from different angles, but it is very well coordinated and it is this: They’re gonna hold you hostage, hold you the American people hostage until you give them power.”

Crenshaw said pointed out that “Democrats can’t for the life of them condemn Antifa and these violent mobs.”

Crenshaw continued: “Whether it is sugarcoating their behavior as mostly peaceful or Jerry Nadler saying Antifa is a myth. Remember Eric Swalwell said he’s never heard of Antifa. Remember the governor of Washington refused to even acknowledge that CHAZ existed at first. There’s a pattern here.”

The Texas congressman said that proof of his argument lies in the fact that normally protesters “have some kind of demand.”

“There’s something that would stop their protest, maybe a policy change,” he concluded. “But that never happens. Even when Portland defunds their police it doesn’t stop the mob. They continue because it’s the power that they’re after.”

The leftist mob is essentially telling Democrats they will provide anarchy, chaos and make life even more miserable for the average American still dealing with the coronavirus and that will provide Democrats with leverage going into the 2020 election, historian and columnist Victor Davis Hanson said on Monday’s “Ingraham Angle” on Fox News.

Hanson told host Laura Ingraham that Democrats can tell voters that, “We can make it all go away if you just vote for us.”

“And then, in exchange, Antifa and BLM say to the Democrat Party, ‘Now we own you in this Faustian bargain. So when you come to power, this is what we want,’” he said.

Hanson said Democrats see in the rioters their best chance to get President Donald Trump out of the White House after several attempts, such as their Russia collusion hoax, came up short.