Team Biden is attempting to cover up massive fraud in the Covid unemployment payment program, the ranking Republican on the House Ways and Means Committee said. 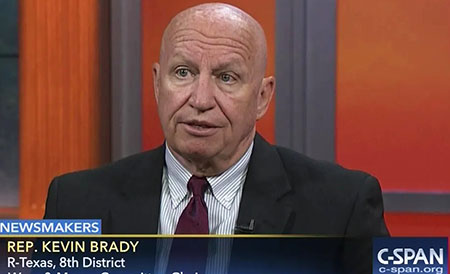 Rep. Kevin Brady of Texas said on Tuesday that as much as $400 billion of U.S. taxpayer money used for unemployment aid last year was lost to “criminal fraudsters.”

Brady said that, “at the low end,” the White House estimates nearly $80 billion was lost to fraud last year. Outside analysts, however, have put that number much higher, estimating that “criminal fraudsters have stolen $400 billion from American taxpayers — that’s half of all the COVID unemployment aid,” Brady said.

“And put another way, $400 billion is more than the entire 2021 budgets of the Army and the Navy combined. And yet Democrats have the nerve to say that Americans need to pay more in taxes,” Brady added.

“Now, the Biden administration has taken unilateral action to sweep suspected fraud under the rug, allowing states to waive large numbers of suspicious claims and forego recovery and restitution for taxpayers,” he added. “This is a cover-up from the Biden administration on an issue that has cost American taxpayers hundreds of billions of dollars. Enough is enough, it’s time for Congress to go after fraudsters and recover the dollars that have been lost.”

Brady acknowledged that stimulus funding was needed in the early shutdown days of the pandemic, but the continuation of most relief programs into late 2021 led to a significant increase in fraudulent activity.

“It was necessary to help the jobless, but these programs lingered and became one of the most flawed and wasteful recovery efforts ever enacted by the federal government,” said the Texas Republican. “In fact, total state and federal spending on enhanced pandemic unemployment benefits exceeded $850 billion in less than two years. These programs have stunted our economic growth and worsened the labor shortage, resulting in the highest inflation in 40 years.”