Coulter mocks the experts: Could there be a more perfect candidate in 2016 than Donald Trump?

“Everything that seems like a disability with Trump always turns out to be an advantage. If we were in the laboratory, designing the perfect presidential candidate, it’s unlikely we would have produced a tasteless, publicity‐seeking, coarse, billionaire, reality TV star. 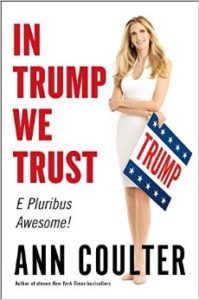 Ha! Look at how wrong we were. It turns out, that is exactly what we needed.

The Miss Grundys of the party all say, I’ll tell you this, Donald Trump frightens me. He’s a vulgarian, a loudmouth, a boor. If the GOP’s real complaint with Trump is that they think he can’t win because of the trophy wives, the divorces, the bad grammar, and the gold fixtures, then why haven’t they been able to produce another candidate without those problems but with Trump’s issues?

They claim they don’t mind Trump’s positions on immigration and trade — they just wanted a candidate more like Mitt Romney to take them. That’s a creature that doesn’t exist in nature. Close your eyes and try to imagine Romney saying the things Trump has said. He couldn’t survive two minutes of the abuse.

The problem with trying to find an old‐school WASPy, understated, dry, less‐is‐more, antique leather, sturdy wood‐and‐brass type to take Trump’s positions is that all those people agree with NPR on everything. Their good taste is their undoing.

Only someone who brags about his airline’s seatbelt buckles being made of solid gold would have the balls to do what Trump is doing. Being crude is an indispensable requirement. It gives him resistance to the opinion of Manhattan sophisticates.

It’s extremely rare for people to take positions that will hurt them with their friends. Being pro‐choice in Hollywood: not brave. Being pro‐choice in Mississippi: brave. Trump lived among fancy Manhattanites. What he was saying on immigration — to say nothing of eliminating the carried interest deduction for hedge fund managers — was going to cost him friends. Trump didn’t care.

He has no nerve endings for peer pressure. The standard riposte to someone who wants to restrict immigration is: You don’t understand — your positions are very gauche, very déclassé. They’re not shared by the people you want to impress. These are the opinions of ethnics in the outer boroughs.

Other people would say, “Oh, my gosh — did anyone see?” Trump said, Yeah, I think I still want to build a wall.

The sophisticates didn’t have a comeback. They’d never gotten that far with anyone else.

The media successfully smeared Romney as an out‐of‐touch multimillionaire, whacking working‐class Americans with his polo mallet. He was helpless. Tasteful people don’t talk about themselves, and they certainly don’t talk about money. Not Trump! Early in Trump’s campaign, journalist Mark Halperin asked him about the “backlash against rich candidates like Mitt Romney — any chance of that with you?” Trump said, “First of all, he wasn’t rich.”

And that was that. How do you attack someone for being rich who is constantly bragging about how rich he is? Yes, yes, I’m a WASP, too — it’s appalling, embarrassing, awful — but oh, my gosh, does it work! Luckily, voting machines register only yes or no — not yes, but I hate myself.

Trump is like a Shakespearean “fool”: he seems crass because he speaks the truth. Fashionable people might cringe when Mike Tyson shows up at the inaugural ball as a guest of honor, but nobody else is giving us a wall.

The Trump candidacy puts Democrats in an extremely awkward position. They are the party of elegance and fabulosity, but also claim to be the party of the “blacks and browns” — who see absolutely nothing wrong with Trump’s taste. Jay Z and Beyoncé may not like Trump’s positions, but, boy, they like his style. They’re asking themselves, How can a person of such taste be a Republican? He’s P. Diddy in the Hamptons, disturbing the neighbors with his parties.

The more you think about it, the more you realize Trump has an awful lot of useful tools in his toolbox: he has all that on‐camera experience; he’s perfectly comfortable walking into a gaggle of microphones; he loves being in the limelight and he’s gotten really good at it.

If Trump hadn’t been a “narcissist” — or, as we now see it, a self‐confident alpha male — he would never have raised all those awesome issues, and certainly would have backed down at the first yelp from the press. Americans would have had to watch in horror as he clarified that what he meant was that Mexico was sending us its David Livingstones and Niels Bohrs, to do the jobs Americans won’t do.

Asked about the lost businesses, he said, “I had disloyal people like Macy’s, and like others, ‘Oh, Donald, you’re a little controversial, we’re going to have to drop you, we’re going to have to’ — I said, ‘I don’t care. The ties, what do they mean to me? [Motions to the moderator] He’s wearing one of my ties, by the way, it’s very nice. Very nice. I never liked them that much because they were made in China, so it never mattered that much.”

If it takes a narcissist to do that, we need more narcissists running for public office.”

2016 presidential election, Coulter mocks the experts: Could there be a more perfect candidate in 2016 than Donald Trump?, WorldTribune.com