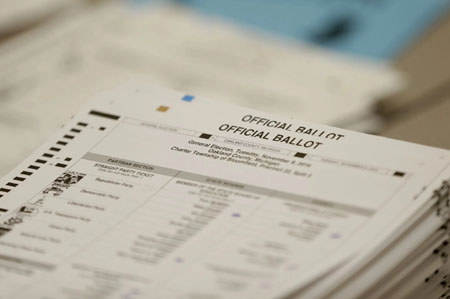 Constitutional attorney Matthew DePerno, who filed the lawsuit which led to the examination, said that when ballots are put through the machine, a 68.05 percent error rate means that 68.05 percent of the ballots are sent for bulk adjudication, which means they collect the ballots in a folder.

“The ballots are sent somewhere where people in another location can change the vote,” DePerno said, Gateway Pundit reported.

Related: Unreported: How a pro-Trump county in Michigan could reverse 2020 election outcome, December 13, 2020

The most important part of the report is that “this was not done by a couple of interns, as some people have suggested. This is a systematic program designed to generate errors that affect the outcome of the election,” DePerno said, adding that the Dominion machines were “meticulously crafted to do exactly what it did.”

DePerno said he believes “It was either a major software company, or it was a foreign entity that was behind this. There are other forces behind this. This violates all cybersecurity protocols. It doesn’t matter who you vote for. No one can be confident that with a 68.05 percent error rate that your ballot was not mass adjudicated.”

During an emergency hearing in the 13th Circuit Court on Monday, Judge Kevin A. Elsenheimer granted permission to DePerno to release the findings of the forensic examination of 16 Dominion Voting machines in Antrim County.