Constitution Day: Remembering 39 men and a world-changing stand against tyranny

On this day in 1787, 39 men signed a document that changed the world. They and their contemporaries had only recently won a hard-fought war of independence, breaking free of the tyranny of a monarch across the sea. While a replacement crown was the last thing they wanted for their new government, these men also bore witness to the failure of the loose confederation of autonomous states they preferred. 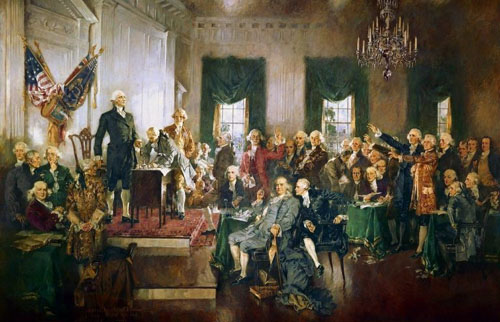 The Founding Fathers knew the new government must be limited enough to protect the citizenry from future leaders less altruistic than they, yet strong enough to unify the states and protect the people from a variety of threats. And so, on September 17, 1787, they signed their names to the best compromise they could imagine and agree upon – the Constitution – and the Republic was born.

But the United States they created was not quite the nation we know today.

While the Founders wanted to avoid the totalitarian control of a crown, they also recognized and feared the tyranny of the majority. When a populace is governed by direct democracy, whatever group holds the majority vote – or even just a plurality if no majority is explicitly required – rules over all others just as absolutely as any dictator.

This is the reason behind what might otherwise seem an unnecessarily complex system. The people of each state voted to elect their representatives in Congress and their own state legislatures – direct democracy.

But the rest of the federal government was chosen rather undemocratically. The state legislators, not the people themselves, chose senators to represent their states in Congress. The president and vice president were elected, not by the people, but by a group of electors chosen by each state.

Today, the popular vote determines which electors get to vote, and even that last remaining vestige of the original Republic is and has for years been under attack by those who believe direct democracy is the best government for the most people.

Even the Constitution as originally written didn’t assuage all the fears of tyranny, and one condition of ratification for some was the inclusion of some protection for the rights of the people. The first ten amendments to the Constitution, ratified together and collectively called the Bill of Rights, fulfilled that requirement.

How right they were to demand this be explicitly included. Over the years, these rights have been progressively eroded – some in the name of equality and others in the name of security. Despite language that seems quite clear and absolute, we have government restrictions on the practice of religion, free speech, and the right to keep and bear arms – clear violations of the First and Second Amendments. At least with the various infringements to the Fourth, there is some wiggle room in just what can be considered “reasonable” – though concepts such as the NSA’s hoarding of personal data from phone calls and the practice of civil asset forfeiture certainly stretch the word thin.

The Founders imagined – and created – a fairly lean and limited government, able to operate on what would today be considered a shoe-string budget and, for the most part, without infringing too terribly on the rights of the people. It wasn’t perfect, but it wasn’t the bloated behemoth that governs today.

The aforementioned NSA, the CIA, the FBI, the IRS, and all of the other alphabet soup agencies that have cropped up over the years in response to some crisis or other – whether real or imagined – are a blight on the Founders’ dream and a heavy millstone around the necks of the people.

So this Constitution Day, remember the Republic that used to be, as it was intended by the Founders. It is a day to mourn the incremental loss of liberty over the years, but also to celebrate those visionaries of yore and the protections their Constitution still provide. In spite of those who would gladly trade individual liberty (and responsibility) for the security and care of the government, we haven’t entirely fallen back to being serfs to the crown … yet.