If Joe Biden does not resign, or is not removed via the 25th Amendment, then he must face an impeachment trial and removal from office for “treason” after his disastrous handling of the U.S. withdrawal from Afghanistan, Alabama Republican Rep. Mo Brooks said.

Biden “has proven himself to be a complete and total fiasco. The horror of dead American military personnel giving their lives in defense of a botched Afghanistan withdrawal is Joe Biden’s pinnacle of incompetence,” Brooks said in a statement. As such, Biden “should, in the name of honor, resign.” 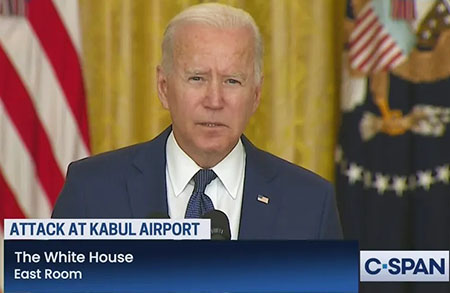 Brooks continued: “America, and the free world, simply cannot afford the risks of such a vacuous man in the office of President of the United States.” If Biden declines “to do the honorable thing and resign, Vice President Harris should initiate efforts to remove President Biden pursuant to the 25th Amendment to the Constitution.”

If Harris refuses to act on the 25th Amendment, Brooks said “Congress must initiate an impeachment investigation to determine whether President Biden should be impeached for ‘treason, bribery, or other high crimes and misdemeanors.’ Constitution Article 3, Section 3 defines treason as ‘adhering to [America’s] enemies, giving them aid and comfort.’ The principal impeachment question Congress must answer is whether President Biden aided or abetted the transfer of advanced American weaponry to the Taliban and other terrorist entities, all of whom have been and are enemies of the United States. If so, President Biden must be impeached pursuant to Article 3, Section 3 and Article 2, Section 4.”

A secondary impeachment question, Brooks said, relates to “Constitution Article 4, Section 4, which states, ‘The United States shall . . . protect (every state in this union) against invasion.’ The word ‘invasion’ is defined by Oxford Dictionary as ‘an incursion by a large number of people or things into a place or sphere of activity’ or ‘an unwelcome intrusion into another’s domain.’ Under either ‘invasion’ definition, President Biden is actively aiding, abetting and coordinating an ‘invasion’ across America’s porous southern border into Texas, New Mexico, Arizona, California and the rest of America, and, as such, President Biden’s southern border abdication should be fully investigated to determine whether it, too, is an impeachable offense.”

Biden “left the Taliban and terrorist entities with inordinate control over American lives, American military equipment, and American military personnel, thereby putting them all at risk,” Brooks said. “For emphasis, Biden armed the Taliban and other terrorist organizations, all enemies of the United States, with the latest and best military technology and equipment America has to offer. President Biden’s failures have caused an humanitarian crises and the heaviest loss of American life in Afghanistan in a decade. President Biden has failed as Commander-In-Chief. President Biden is unable to meet the challenges of a President of the United States. He is mentally unfit to hold the Presidency. In a recent news conference, Biden said he bears responsibility for what has unfolded. I agree. As such, the honorable thing for Biden to do is resign.”

To say that today’s loss of American lives in Kabul is sickening does not begin to do justice to what has happened. It is enraging. And Joe Biden is responsible. It is now clear beyond all doubt that he has neither the capacity nor the will to lead. He must resign