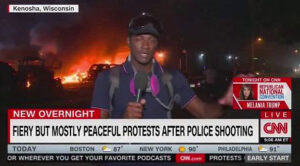 Waving an American Flag that is not on fire is now rioting. Burning down cities are still mostly peaceful protests. The media is insane.

After a summer of riots promoted by the media as mostly peaceful protests, I just cannot bring myself to condemn an actual mostly peaceful protest in Washington D.C.
A few protesters stormed the Capitol, scaring the derelicts in Congress. … But journalistic standards and accountability have no place in the media circus today. The monkeys at the various outlets went ape.
National Review, which considers President Trump and his supporters subhuman, reported, “Chaos at the Capitol: Virginia Troopers, National Guard Deployed to Disperse Pro-Trump Rioters.”  But there was no evidence of any riots. No buildings were torched. No police cars attacked.

A September 11 Afghan pullout: Should we celebrate?
Read more