Columnist: Post-election revolution is by ‘the government against the people’

Those who continue to inhabit “the swamp” are in a death struggle against America’s voters for control of the country, a columnist said.

“By any historical and constitutional standard, ‘the people’ elected Donald Trump and endorsed his program of nation-state populist reform,” Matthew Continetti, editor in chief of the Washington Free Beacon, wrote on Feb. 17. 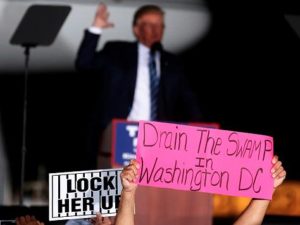 “Yet over the last few weeks America has been in the throes of an unprecedented revolt. Not of the people against the government — that happened last year — but of the government against the people. What this says about the state of American democracy, and what it portends for the future, is incredibly disturbing.”

Trump, who won with 306 electoral votes, said in his Inaugural Address: “What truly matters is not which party controls our government, but whether our government is controlled by the people.”

Is it? Opposition to Trump “takes many forms,” Continetti wrote. “Senate Democrats have slowed confirmations to the most sluggish pace since George Washington. Much of the New York and Beltway media does really function as a sort of opposition party, to the degree that reporters celebrated the sacking of (Michael) Flynn as a partisan victory for journalism. Discontent manifests itself in direct actions such as the Women’s March.

“But here’s the difference. Legislative roadblocks, adversarial journalists, and public marches are typical of a constitutional democracy. They are spelled out in our founding documents: the Senate and its rules, and the rights to speech, a free press, and assembly. Where in those documents is it written that regulators have the right not to be questioned, opposed, overturned, or indeed fired, that intelligence analysts can just call up David Ignatius and spill the beans whenever they feel like it?”

Continetti continued: “The last few weeks have confirmed that there are two systems of government in the United States. The first is the system of government outlined in the U.S. Constitution — its checks, its balances, its dispersion of power, its protection of individual rights. Donald Trump was elected to serve four years as the chief executive of this system. Whether you like it or not.

“The second system is comprised of those elements not expressly addressed by the Founders. This is the permanent government, the so-called administrative state of bureaucracies, agencies, quasi-public organizations, and regulatory bodies and commissions, of rule-writers and the byzantine network of administrative law courts. This is the government of unelected judges with lifetime appointments who, far from comprising the ‘least dangerous branch,’ now presume to think they know more about America’s national security interests than the man elected as commander in chief.”

Primarily during Democratic presidencies, “the second system of government was able to live with the first one,” Continetti wrote. “But that time has ended. The two systems are now in competition. And the contest is all the more vicious and frightening because more than offices are at stake. This fight is not about policy. It is about wealth, status, the privileges of an exclusive class.”

Donald Trump “did not cause the divergence between government of, by, and for the people and government, of, by, and for the residents of Cleveland Park and Arlington and Montgomery and Fairfax counties,” Continetti continued. “But he did exacerbate it. He forced the winners of the global economy and the members of the D.C. establishment to reckon with the fact that they are resented, envied, opposed, and despised by about half the country. But this recognition did not humble the entrenched incumbents of the administrative state. It radicalized them to the point where they are readily accepting, even cheering on, the existence of a ‘deep state’ beyond the control of the people and elected officials.

“Who rules the United States? The simple and terrible answer is we do not know. But we are about to find out.”

Columnist: Post-election revolution is by ‘the government against the people’, drain the swamp, Trump administration, Trump resistance, WorldTribune.com