Columnist: No looking away from Biden’s cognitive dysfunction 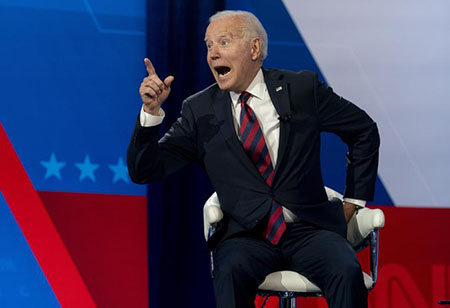 But it did enable Democrats to ride his “good ol’ boy just Joe” persona while taking advantage of his “obvious dysfunction” to take the White House and then “stuff it and staff it with behind-the-scenes socialists and communists and globalists and collectivists who will then busily work from within to undermine both Constitution and country,” Cheryl K. Chumley wrote for The Washington Times on July 27.

For the 78-year-old Biden, all the usual gaffes and Corn Pop stories “have turned a more serious corner,” Chumley wrote. “By all appearances, ‘just Joe’ is a fruitcake. People are definitely noticing.”

Rep. Ronny Jackson, Texas Republican and former White House physician for both former Presidents Donald Trump and Barack Obama, said in a recent interview with Fox News host Sean Hannity: “There’s something seriously going on with this man right now. And, you know, I think that he’s either going to resign, or they’re going to convince him to resign from office at some point in the near future for medical issues, or they’re going to have to use the 25th Amendment to get rid of this man right now.”

Since the Biden installed in the White House is the same as the candidate who spent most of the 2020 election cycle in his basement, it is obvious that the fix was in for Democrats from the get-go, Chumley noted.

“Doddering, stuttering, confused, wandering, barely awake, weak. He’s been a puppet all along,” Chumley wrote. “But his obvious cognitive dysfunction is not amusing. The world is watching; the world’s anti-American forces are watching.”

During his recent disastrous CNN town hall talk with host Don Lemon, Biden said: “And the question is whether or not we should be in a position where you, ah, um, are — why can’t the, the, the experts say, ‘We know that this virus is in fact,’ ah, um, ah, it’s, it’s going to be — or excuse me, we, we, we know why all the drugs approved do not temporarily prove, but permanently approved.”

Chumley concluded: “It won’t be long before (Kamala) Harris takes the helm. This is not as devastating as it sounds. After all, Biden is not leading now. Biden, Harris — whomever. The puppet masters, in this administration, will stay the same. The string pullers in this White House will stay in their secret places of power.

“And that speaks volumes about the Democratic Party’s true concerns for America — and people.”