In the wake of the Mueller report, Democrats and the major media “pulled one of the greatest sleight-of-hand tricks in U.S. political history,” by switching the non-stop narrative from “collusion” to President Donald Trump being “unfit to govern” due to obstructing justice, a columnist wrote.

“You won’t find a more exact comment on what they’ve done than this line from ‘The Usual Suspects’: ‘The greatest trick the devil ever pulled was convincing the world he didn’t exist . . . and like that, poof, he’s gone.’ Poof, the ‘Russian collusion narrative’ is gone,” Daniel Henninger wrote for the Wall Street Journal on April 24. 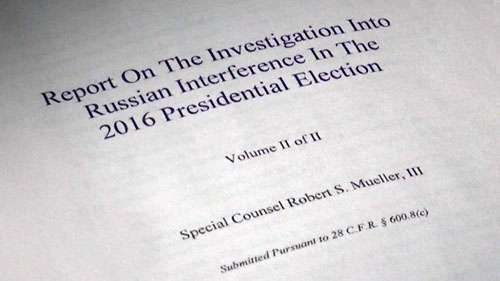 The Mueller report’s details of its investigation targets is “each the subject of an uncountable number of media reports and cable TV commentaries,” Henninger wrote, “all strongly suggesting collusion:

But now, the media have “tossed all that down the memory hole and replaced it with the story line that the second half of the Mueller report proves Trump ‘unfit’ to be president. He raged. He told lies. He told his people to lie. In short, he’s too odious to be president.

Perhaps. Or perhaps the decision tree most voters work their way through in casting a vote for president is more complex than the Trump opposition’s limitless obsession with his personality.”

Henninger noted that “Character surely counts for something, though the last choirboy the voters elected president was Jimmy Carter, who got tossed out after one term by voters who thought that reversing a stagnant economy with high inflation and Americans held hostage by Iran trumped a president’s personal rectitude. The unemployment rate recently has been at a nearly 50-year low.”

“Since the subject has been raised,” Henninger wrote, “one may ask: How ‘fit’ to govern the U.S. are Kamala Harris, Elizabeth Warren, Bernie Sanders, Beto O’Rourke or Pete Buttigieg?”

Those Democrat 2020 hopefuls “have proposed or embraced Medicare for All, the Green New Deal, massive college-debt forgiveness and free public-college tuition — with a fanciful, wholly irresponsible cost in multi-trillions of dollars. By comparison, Donald Trump’s $5.6 billion ‘wall’ looks like fiscal austerity. Still, he’s the one beyond the pale of fitness,” Henninger wrote.

“Governance matters,” Henninger wrote. “Success at governance — running a country, state or city — should indeed be a measure of political fitness. If so, fitness to govern looks to be in short supply in potholed New York City, homicidal Chicago, needle-park San Francisco and Baltimore, with its five police chiefs in the past five years.

“All these cities, protectorates of Democratic governance, are filled with upscale progressives convinced Donald Trump is morally unfit to govern, even as they step around and over the mentally ill homeless lying abandoned on their sidewalks.”

Henninger continued: “On this matter of morality, one more thing … there is a straight-line relationship between the country’s hyperpoliticized culture and why many people voted for Donald Trump no matter what. That is, what the left has done to the culture makes Trump’s persona largely irrelevant to them.

“All presidencies have flaws and failures. But with the collusion narrative finally ended, please spare us two years of the unfit-to-govern sequel.”