Joe Biden continually promised during the 2020 campaign that he had a definitive plan to quickly defeat the coronavirus.

A columnist noted that Biden’s promises were contingent on someone else making “all the preparations for him in advance.” 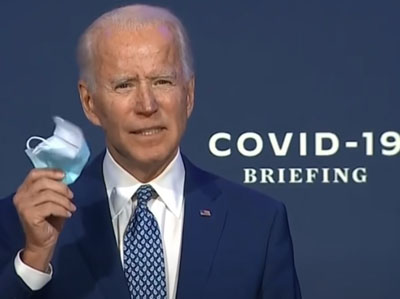 Biden “went from assuring everyone that he was the one who could ‘shut down’ the pandemic to now whining that things aren’t going to happen as quickly as he promised,” Eddie Scarry noted in a Feb. 12 op-ed for the Washington Examiner..

“The man with the plan is now the guy who just guesses and hopes no one notices.”

Biden said his team was “under the impression and were told that we had a lot more resources than we did when we came into office. While scientists did their job in discovering vaccines in record time, my predecessor, to be very blunt about it, did not do his job in getting ready for the massive challenge of vaccinating hundreds of millions of Americans. He didn’t order enough vaccines. He didn’t mobilize enough people to administer the shots. He didn’t set up a federal vaccine center where eligible people could go and get their shots.”

“That’s a lot of complaining for someone who claimed repeatedly during the election that former President Donald Trump had no plan. So, if he knew that then, what business did Biden have promising so much so quickly? Now, he’s blaming the continuing rise in COVID-19 death totals and the sauntering spread of vaccinations on a lack of things being done for him in advance. It’s almost as if he can’t take responsibility for anything.

“Moreover, it’s a ridiculous lie that Trump ‘didn’t order enough vaccines.’ When orders were placed by the Trump administration, there literally weren’t any vaccines. Unable to order something that doesn’t exist, the administration instead had to place bets on which companies would actually be among the first to produce an effective vaccine successfully.”

The corporate media “are, of course, letting Biden get away with this,” Scarry wrote. “At best, you’ll hear the occasional tut-tutting about his lies about opening public schools. And now that Trump is no longer around to shoulder the blame, those on-screen graphics totaling each new virus-related death and infection are mostly gone from CNN and MSNBC.”

As for Biden, he and his team never really had a “plan to end the pandemic,” Scarry concluded.