Columnist: Is Trump in over his head — or just executing his plan?

When is the storm coming? Where’s the Kraken?

The clock on overturning the results of the disputed 2020 election is running out. What is President Donald Trump’s plan? 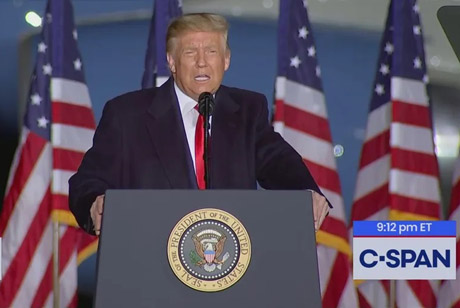 A columnist asked: “Will a massive declassification of criminal and seditious activities subdue the Democrats? Will Trump win without a bloody battle?”

Thus far, Trump “has followed the Constitution, making legal arguments up to and including the U.S. Supreme Court,” Brian C. Joondeph noted in a Dec. 29 op-ed for American Thinker. “What Vice President Pence does when it is time to again follow the Constitution and certify the Electoral College votes is to be determined.”

“At this point, it’s a binary choice. Either Trump is in over his head and will be dragged out of office. Or he is executing his plan, on his terms and timing, as he has done since his famous escalator ride at Trump Tower in 2015,” Joondeph wrote.

“A presidential election was stolen, and Trump’s own executive agencies say ho-hum, roll over, and go back to sleep. The same FBI that sent 15 agents to investigate a garage door handle that Bubba Wallace claimed was a noose, can’t seem to find any reason to investigate a host of election irregularities,” Joondeph wrote.

Meanwhile, Republicans in Congress who were all too happy to ride Trump’s coattails to victory are now telling the president to “accept the results” and “move on.” These ingrates are “oblivious to the fact that if they get their wish, their party will become as irrelevant as the Green Party,” Joondeph noted.

Jooneph continued: “If nothing is happening, then that’s on him. Is he flailing away in a vain attempt to win a second term? After all that he has been through and overcome, not only to get elected in 2016, but also to stay in office for four years, accomplishing more in one term than most presidents do in two, is he about to lose it all to a senile grifter no more qualified to be president of the United States than a manager at a bowling alley?

“At one level it sure seems that way. The clock is ticking with important electoral dates breezing by, getting ever closer to the final date of Jan. 20? On the other hand, President Trump may be playing a different game, one not obvious to most observers, certainly not the media or even his supporters.”

Trump is a fan of Sun Tzu and his treatise on military strategy known as “The Art of War.”

Joondeph noted; “Can Sun Tzu’s ancient wisdom and strategy explain the current apparent ‘nothing is happening’ perception for those who, like myself, are becoming increasingly impatient over ‘all hat and no cattle’ promises coming from Team Trump? Is Trump following the Sun Tzu battle plan?”

Sun Tzu wrote: “Let your plans be dark and impenetrable as night, and when you move, fall like a thunderbolt.”

If Trump has a master plan, “it’s safe to assume that few outside his small inner circle know anything about it,” Joondeph wrote. “An example would be Secretary of Defense Chris Miller speaking to Vice President Mike Pence, thanking him for ‘his steady hand and leadership’ during ‘some of the [most] complex military operations this country’s ever conducted.’ ”

Why haven’t Americans heard of such operations?

“Or were they ‘dark and impenetrable as night’ and executed like ‘a thunderbolt’? This is not faint praise. Pence is not a military guy, but Miller certainly is, a former special forces operator and commander. Miller was close to tears acknowledging Pence’s assistance and leadership. Something is happening,” Joondeph wrote.

“Has Trump already won, now waiting for the optimal time to go to war? The defeated left has been at war with Trump for six years, unsuccessful in their efforts to win?”

More from Sun Tzu: “The supreme art of war is to subdue the enemy without fighting.”

Trump knows the stakes. He is well aware that if Kamala Harris and Joe Biden “get the keys to the kingdom” they will “promptly hand them over to China,” Joondeph noted.

Those who are betting against Trump are reminded to examine how that worked out in the past.

So, is Trump unprepared?

“Au contraire. Trump has been preparing for this moment most of his adult life,” Joondeph noted. “Buckle up for an interesting few weeks ahead.”

2020 election, Columnist: Is Trump in over his head — or just executing his plan?, President Donald Trump, WorldTribune.com