The state Senate in Colorado has passed legislation that would give the state’s electoral votes to the winner of the national popular vote.

The legislation, SB-19, aimed at ditching the Electoral College passed Colorado’s Senate on Jan. 29 by a vote of 19-16, with all Democrats voting in favor and all Republicans against. 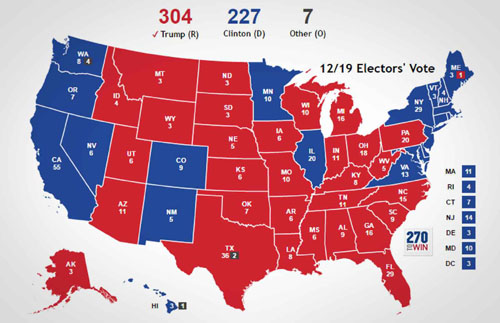 Under Democratic Sen. Mike Foote’s bill, Colorado would join 11 states and the District of Columbia in the so-called National Popular Vote Interstate Compact. The compact would require participants’ electors to cast their vote for the winner of the national popular vote.

“This really isn’t a red versus blue idea,” Foote said. “This is about making sure that the president of the United States is elected by the entire nation, not just a handful of ‘battleground states’ that get to decide our presidential elections under the current system. All of Colorado’s voters should be heard, regardless of whether or not we are considered a battleground state.”

Republican state Sen. Owen J. Hill said the legislation “says you’re votes and your choices are no longer your own. We are going to tie your representation to what the other 49 states choose.”

In the 2016 election, Donald Trump took home 304 electoral votes, while Hillary Clinton had 227. Clinton, who led by overwhelming majorities in urban counties of California and New York, won the popular vote by 3 million votes.

Clinton in September of last year called for abolishing the Electoral College.

The Colorado bill is not likely to become law unless the Colorado House approves and enough states agree to the compact.

The states which have thus far agreed to the compact add up to 172 electoral votes. If 98 more electoral votes commit it would go into effect, though its constitutionality would almost certainly be challenged in court.